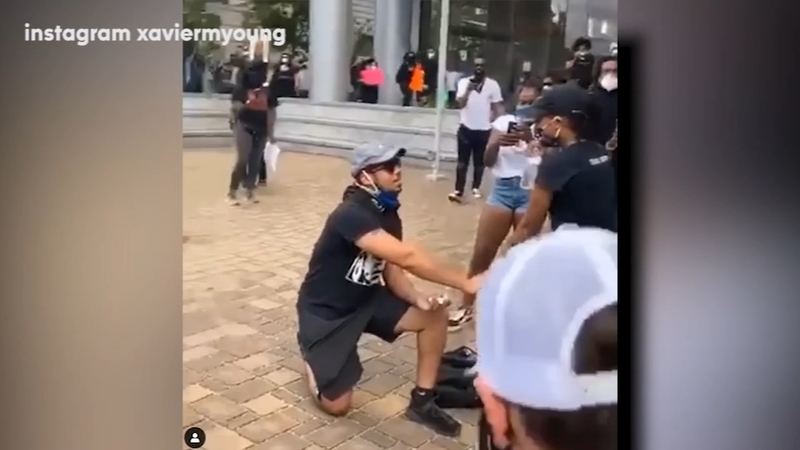 RALEIGH (WTVD) -- A Raleigh couple's social media post showing them getting engaged in the middle of a protest downtown in going viral.

Xavier Young, 26, dropped to one knee asking 23-year-old Marjorie Alston to marry him in the middle of a march in Raleigh on May 30 in response to the killing of George Floyd in police custody in Minnesota.

The couple, who met at work and have been together for two years, have talked about getting engaged and even looked at rings. Young says he felt in the middle of the protest it was the right moment.

"The reason why I was convinced that I wanted to marry her is because I saw her passion and how badly she wanted to get out here," Young said.

"I just wanted to be out here because it happens so often and I think everybody needs to be heard at this point and the more voices, the better," Alston said.

Young says another reason he wanted to join her in the march is because the two are expecting a baby in November and he wanted to make sure Alston was safe.

"We're going to tell the kid, you were born to be a revolutionary!" Young said. "You know? Me and your mom got engaged at a protest and you were there, before we even knew who you were. You were at a protest, your strong enough for this." he said.

The two hope their show of love resonates to others.

"Things are getting pretty hectic," Young said. "But, if you can see, if you see what what we do and it brings you a little bit of light, some hope, then take that with you and pass it on."

"Even during the protests and all the ugliness happening, like good things happen every day still, all the time," Alston said. "So, we shouldn't focus on the negative all day, this is something to smile about at least once."