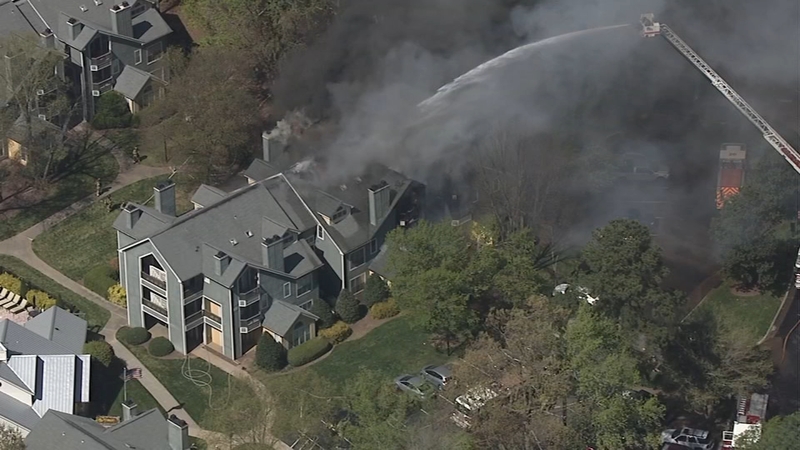 RALEIGH, N.C. (WTVD) -- A two-alarm fire displaced many residents after a Friday afternoon fire at the Regency Place Apartments in West Raleigh.

Just after 3 p.m., Raleigh and Cary fire departments responded to the fire located at St. Regis Circle. With the help of 60 firefighters, the fire was under control in an hour and 45 minutes.

Fierce flames were seen shooting from the roof of one of the buildings, destroying 12 units at the complex.

Just got a bit closer to the scene of this apartment fire. Not much remains of this building but we’re hearing no injuries here thankfully. #abc11 pic.twitter.com/ZIQF5vnlqB

Kellee Meiners just moved into her apartment two weeks ago. Since moving in, she has been working from home because of the stay-at-home order put in place by the Governor to combat the coronavirus pandemic.

Meiners said the fire started at the ground level.

"All I heard was people yelling and coming outside and they're all taking pictures of the building," said Meiners. "People were running out down the stairs: obviously that makes a lot of noise and yelling and stuff like that so that's what made us come outside."

Luckily, Meiners said she was thankful that she was working from home because she was able to retrieve her two dogs Cory and Ada.

Others looked on in distraught, trying to make sense of losing their home at a time when government officials around the country are urging people to stay home. Meiner noted that some of the residences had been living at the apartment complex for five-plus years.

No injuries were reported as a result of the fire. But the scene remains under investigation by authorities, fire officials are not ruling out that it may have been suspicious.

Crews are still out here tonight more than 7 hours after this fire happened in west @RaleighGov. Many folks are staying elsewhere tonight cuz of this intense fire. #ABC11 pic.twitter.com/7lpGzddeBF