Raleigh puts best foot forward for MLS; is it enough? 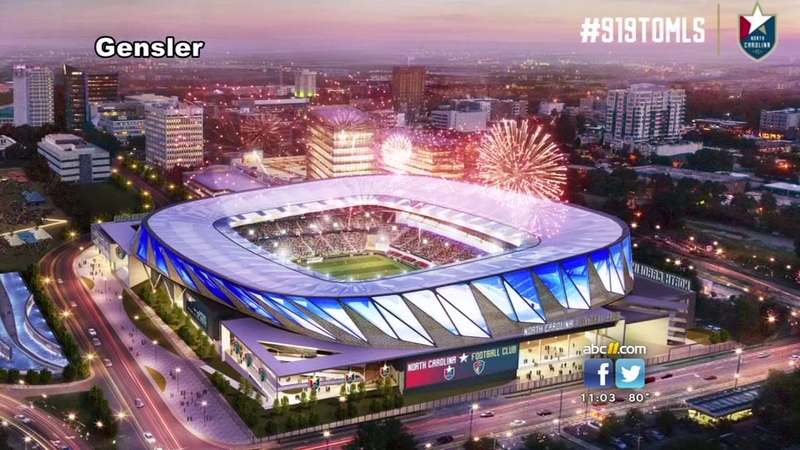 The Major League Soccer proposal revealed Wednesday aims to turn this boring stretch of downtown into a new nexus.

Amped up on Triangle soccer pride, North Carolina FC fanatics paraded through downtown Raleigh, fueled by the freshly unveiled vision of turning this underused plot of government land into a $150 million soccer mecca for the newest MLS expansion team.

"If we have a downtown stadium, it'll be the life of the city. It'll be what you think about when you think of Raleigh," said North Carolina FC fan Justin Mayo.

Mayo and hundreds of other fans partied outside and inside City Market on Wednesday evening, in their chance to show Major League Soccer just how much fan support the Raleigh metro area would show for a pro franchise.

North Carolina FC owner Steven Malik said he thinks the city has an "excellent chance" of winning the franchise. Malik's bid is just one of 12 cities vying to win over MLS.

Charlotte, with its already dynamic urban core complete with two pro team stadiums, is among the cities bidding for the MLS franchise. Malik seemed undeterred by the stiff competition.

"(Charlotte) has a worse bid because of that. We don't have to compete with the NFL," Malik said. "We're not a football town, we're a futbol town."

Major League Soccer President Mark Abbott told ABC11's Mark Armstrong he was impressed by what he saw in Raleigh during Wednesday's tour - including those plans for that 20,000 seat stadium at Peace and Salisbury streets.

"I would say we've had a positive experience so far today," Abbott said.

But do the splashy renderings give Raleigh an edge in the competition? Abbott was not showing his cards.

"As Steve (Malik) said, this will be the beginning of the stadium process and the work that he's continuing to work on," Abbott said.

But outside City Market, the soccer faithful were already banking on Raleigh.

"No problem, no problem, we got it. It's us," said NCFC fan Jeff House. "The support is there. The economics are there. We're ready to go."

Another question MLS will want answered is how Malik plans to pay for the stadium. Malik told ABC11 he will likely ask Wake County taxpayers to help foot the bill as part of a larger financing plan.