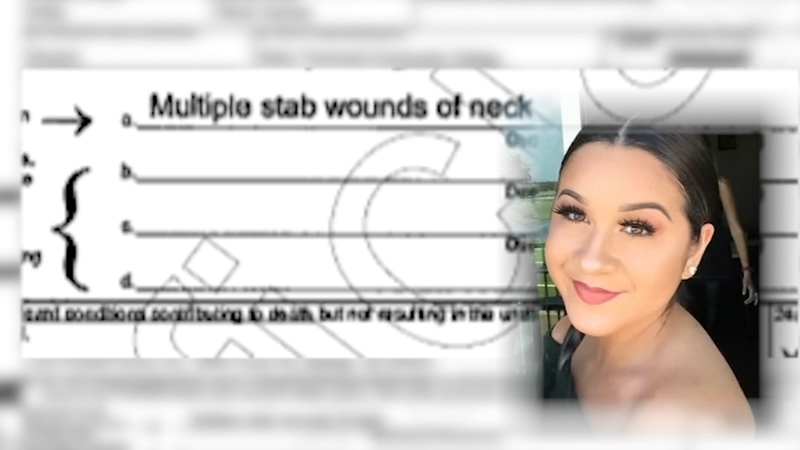 RALEIGH (WTVD) -- A 20-year-old Raleigh student who was found dead in her apartment last week was stabbed to death, records show.

Christina Matos' death certificate shows that she died from "multiple stab wounds" to the neck.

Her roommate, Erick Gael Hernandez Mendez, is accused in her death.

Records from the Wake County Register of Deeds show that she had recently married Hernandez Mendez.

Friends told ABC11 that the two didn't have a romantic relationship but Matos married him so he could get his green card. In exchange, the friends said, he would give her money.

"Eric was an illegal immigrant," Matos' friend Savannah Ferrell said. "That actually, he came to Christina in hopes that they could get married and he could be a legal citizen, and he promised, 'okay if we marry, I'll give you $15,000 and we kind of like, kind of go our separate ways and eventually get divorced in three years.' Christina had the full intention, just to get divorced, get her check and be gone. She was moving out of this apartment within a few months."

Friends told ABC11 on Friday that the two didn't have a romantic relationship but Matos married him so he could get his green card.

Her brother said the family did not know the two were married.

Matos was last seen alive at her apartment April 2 after going out with friends.

Her body was found inside her apartment at Signature 1505 on Hillsborough Street near NC State after a 911 caller requested a wellness check.

Raleigh police officers discovered Matos' body inside her locked bedroom, hours after her mother and brother had gone to check on her. Her mother had a key to get inside the apartment but couldn't open Matos' locked bedroom door.

Matos' mother and father said it was her first apartment. She shared it with roommates while she worked and took radiology courses at Wake Technical Community College.

Hernandez Mendez is being held in the Wake Detention Center. The judge informed him that he faces the possibility of the death penalty or life in prison without the possibility of parole if he is convicted on the charge of first-degree murder.

Matos' funeral was on Monday at Lea Funeral Home in Raleigh.

Many friends showed up to pay their respects.

"You're sad. You're confused. There's a little bit of anger. You don't have answers that you want," said Will Kelley, Youth Pastor at the Everett Chapel Free Will Baptist church.

"She will never be forgotten. She will always be remembered as the hard-working, big-hearted woman that she is," her brother said.
Report a correction or typo
Related topics:
raleighmurderhomicidewoman killedstabbingdeath investigation
Copyright © 2021 WTVD-TV. All Rights Reserved.
More Videos
From CNN Newsource affiliates
TOP STORIES