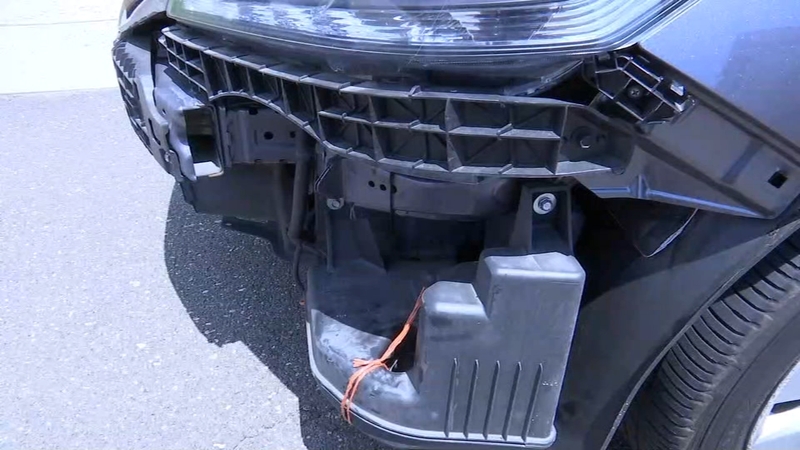 RALEIGH, N.C. (WTVD) -- A Raleigh woman is recovering after she said a driver crashed into her front bumper after a prior rear-end collision only minutes earlier.

Jennifer Garcia was returning from work shortly after 5 p.m. when she felt her vehicle being hit from behind on Litchford Road near Gresham Lake Road.

Initially, she thought it was the end of a chain reaction involving multiple other vehicles but then realized it was just from the vehicle behind her.

Garcia described the vehicle as an older model gold Toyota Corolla with a crack in the windshield.

Both she and the other driver pulled into a side street, where she got his attention and told her he had hit her. Garcia said the driver said there was no damage and drove off.

At that point, Garcia called 911 and began to pursue that driver to relay his vehicle information to the police.

Eventually, both ended up on Lemuel Drive, which had been blocked by construction. That's when the driver pulled into Dorrington Trail.

"He proceeds to go down to the end of the cul-de-sac, pull into a driveway, turn around, and next thing I know comes flying back down the road and starts hitting my car to try and get out," Garcia said.

This all happened as she was on the phone.

The driver was able to get in between her vehicle and a parked trailer before turning back onto Lemuel and onto Litchford. A neighbor chased after the driver and snapped photos, which Garcia posted and shared onto social media.

Off-camera, a witness walked ABC11 through the scene and pointed to debris at the intersection of Dorrington Trail and Lemuel Drive. He confirmed the driver of the gold-colored vehicle initiated contact and said the collision at Dorrington and Lemuel knocked off Garcia's bumper.

Two neighbors and RPD used twine to tie the bumper back on so Garcia could drive home.

"It's just a simple rear-ending and escalated into something it didn't have to be," Garcia said.

On Tuesday, Garcia went to the chiropractor for treatment related to the incident but is thankful her injuries aren't worse.