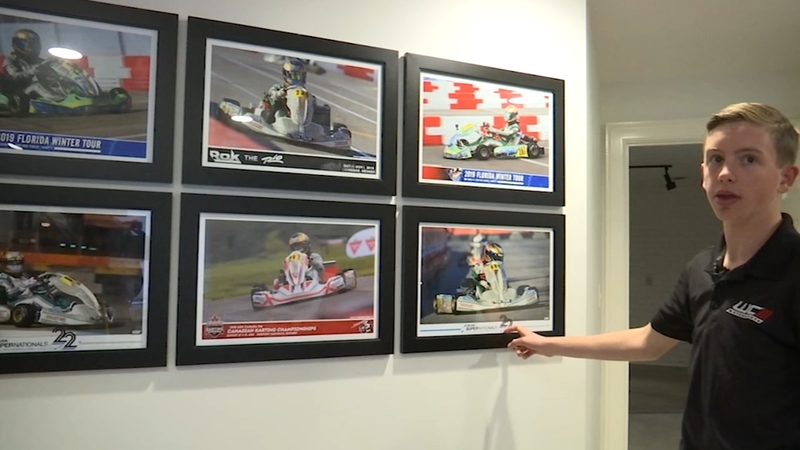 RALEIGH, N.C. (WTVD) -- Raleigh has a rising star in the world of racing. William Cox, 14, recently won a US national championship in his division.

Then he backed that up with a third-place finish in a world-wide competition during the weekend.

No, he doesn't have a North Carolina driver's license yet, but he's already a pretty good driver.

Legend Cars resemble classic American models from the 1930s and '40s on a smaller scale. Under the hood is a motorcycle engine.

William competes in the Young Lions division (ages 12-to-15) where he recently took first place at the US Legends Car Nationals. William started the competition, which is held at Carteret County Speedway, on the pole.

"It was just an amazing feeling. I was like, 'I finally did this,'" William said. "All this hard work has finally paid off."

Raleigh has a rising star in racing. ⁦@willcox3racing⁩ recently won at US Legends Car Nationals and backed it up with 3rd at the World Road Course championships. Not bad for a 14 year old who’s yet to get a license. pic.twitter.com/vhuDod8O8a

"He got to do what he has wanted to for so long, which was burnouts and doughnuts on the finish line," said his mom, Natalie. He loved every minute of it.'

In less than two years, William has gone from zero (as in mph) to champion. As a 12-year-old, he gave cart racing a try. Quickly, William discovered he excelled while mashing on the accelerator.

"I love the speed. I love the aggressiveness of the drivers. I love battling it out and going to turn one on the start," William said.

William switched to the Legend circuit in June and hasn't slowed since. The trophies are piling up and now include a national championship and world road course third-place prize.

William spends five hours a day in a simulator perfecting his craft. The plan is to continue racing Legends and go after the overall points title.