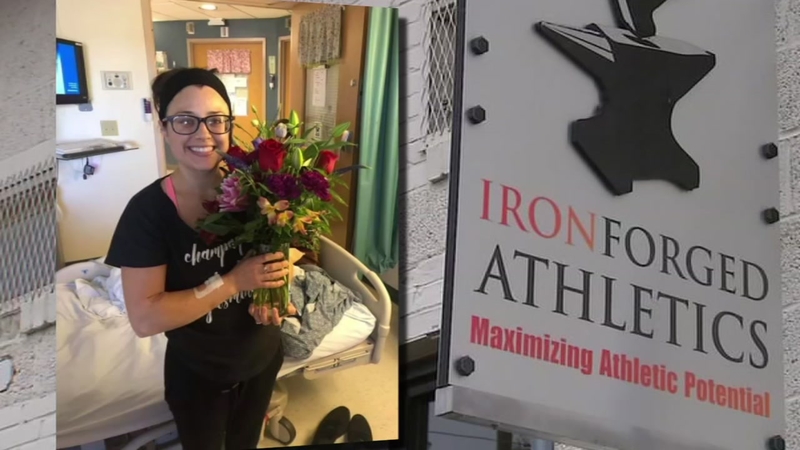 FAYETTEVILLE, N.C. (WTVD) -- A Cumberland County woman who survived being hit by a drunk driver two years ago has now been diagnosed with an aggressive form of leukemia.

The Fayetteville community is "Rallying for Rileigh." The young mother is a CrossFit fanatic and works as a dietician at her gym.

There is a saying that CrossFit can either make or break you. For Rileigh Denis, it's part of the reason she's alive today.

"My doctors did say if I hadn't been taking care of myself, I would've been dead," Denis said.

Two years ago, Denis and her husband were in Florida when a drunk driver slammed into her as the two were walking across the street.

"I was intubated. I had a traumatic brain injury and a brain bleed," Denis said.

Miraculously, a month after that; Denis was back in the gym at Iron Forged Athletics doing what she loves - until she got more devastating news last week.

"It's like the worst-case scenario, I feel like. It could be an auto-immune or you're really anemic but then hearing you have cancer, that's a pretty big deal," Denis said.

Denis spoke with ABC11 via Facetime from Duke Hospital. Her husband is an active duty servicemember and takes care of their 1-year-old while she gets treatment.

"That's honestly the hardest part for me is not being with them," Denis said.

That's where the community comes in. Rileigh's gym is holding a special fundraiser and inviting you to battle with her.

"The Battle for Ri: 2.0 is going to be 6 ring muscle ups, 30 double unders, that's with the jump rope. Twenty strict hand pushups. Eighteen burpee box ups and everyone loves a good burpee, and then one squat clean," said Denis' coach, Deb Batchelor.

Batchelor said though the workout is tough, it's nothing compared to what her friend is going through.

"This is actually a really hard workout For me when I'm doing the workout tomorrow, I'm thinking about yes, it is hard but it's not fighting cancer," Batchelor said.

But if you ask Denis, it's a battle that's already been won.

"I try to look at everything positive, instead of weighing down with negativity," Denis said.

The fundraiser is Saturday at Iron Forged Athletics in downtown Fayetteville. Though the highlight is the workout, the event is essentially a fall festival, featuring food, games and opportunities to learn more about your health. For more information visit the gym's Facebook page.

HAPPENING NOW: The community is Rallying for Rileigh, a local military mom now battling cancer, only years after surviving being hit by a drunk driver. https://t.co/K4NZA0dbVp pic.twitter.com/qUUcCqk1we