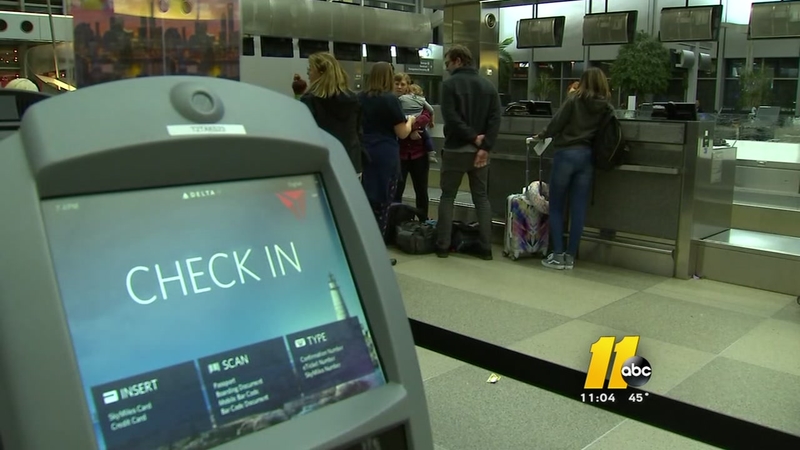 The blackout forced airlines to either cancel flights altogether or divert them.

"We were actually shocked," said Karen Iberte from Georgia. "I've flown a lot and this has never happened ever in my life."

Iberte and Heather Joestings, who is also from Georgia, were two hours into their a flight from Rhode Island to Atlanta, when their plane diverted to RDU Sunday afternoon.

They waited at RDU for hours only to learn their flight was delayed until Monday morning.

Sunday they decided to get a hotel.

"It really stinks." Joestings Sid. "I really want to go home but there's really nothing I can do about it."

The cause of the power outage at the nation's busiest airport has not been confirmed.

The problem grounded dozens of planes leaving thousands of people stranded with nowhere to go like Casey Williams from Durham.

His Delta flight home to Atlanta for the holidays was stuck on the airport's tarmac at 2:00 p.m. Sunday. Williams' says it took more than seven hours for he and fellow travelers to evacuate the plane.

"I've been really impressed by everyone on the plane. People are actually much calmer and composed than I expected to be in a situation like this." Williams says.

But the disappointment was apparent. Durham resident Gary Leach was stuck on the tarmac for four hours until he says Southwest ultimately cancelled his flight.

Sunday he's spending an unexpected hotel stay in Atlanta with a rebooked flight back home tomorrow-for now, at his expense.

"That's not the way you want to spend you Sunday afternoon by no means." Leach says. "It's just very frustrating."