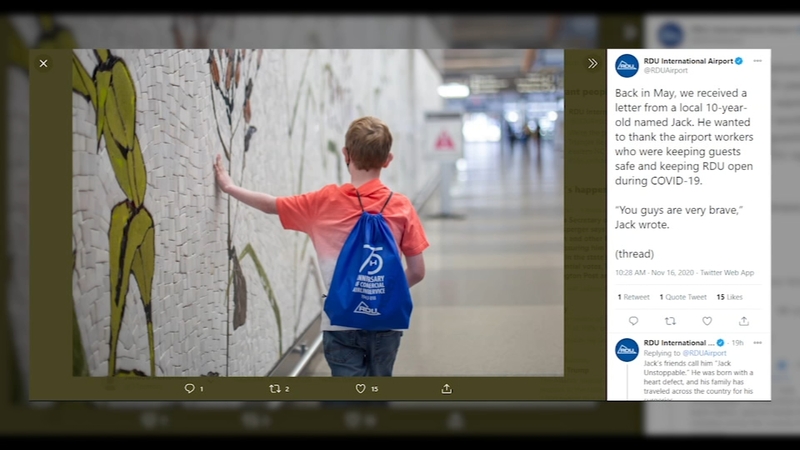 RALEIGH (WTVD) -- A young Triangle boy and the fight for his health have taken him all over the world.

Jack is 10 years old. He was born with a heart defect and faces daily battles from it. Jack was unable to walk until he was two years old, and he had to be fed through a tube until he was three. He had multiple open-heart surgeries before he even started school.

But that doesn't stop him from having a child-like sense of wonder and inquisitiveness, garnering him the nickname "Jack Unstoppable" among family and friends.

Jack has taken solace in getting to go places, thanks in part to Raleigh-Durham International Airport. Fueled by a love for flying, Jack wrote a thank you letter to RDU in May, giving thanks to the employees for keeping the airport running during an uncertain time.

"Thank you for looking out for the airport so that it can be a safe and healthy place to be when people have to travel," Jack wrote. "It's nice of you to help keep the airport running even though you could get sick. You guys are very brave."

Recently, some RDU staff members gave Jack a full-fledged, behind-the-scenes tour of the airport. Jack got to see the ramp tower, all the terminals and, his favorite part, the baggage-handling system.

Surely, Jack can't wait to take to the skies again with his friends at RDU. You can read more about Jack's journey on the RDU website.