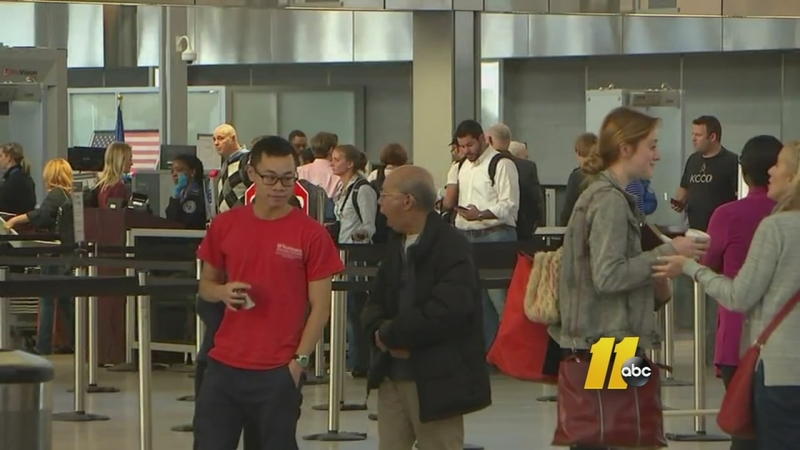 RALEIGH (WTVD) -- On the last day of Thanksgiving weekend travel, representatives with the Raleigh-Durham International Airport expect to see up to 30,000 people.

And if your holiday trek takes you back to RDU, you might be greeted by 33 Christmas tubas playing at baggage claim.

Christmas Tubas welcoming people to @RDU If you look closely...you can see a puppy in the audience 😊 #WelcomeHome pic.twitter.com/NDFhN0B74P

The cheerful sounds of the holiday season rounds out what has been a busy few days for the airport. Since Tuesday, RDU representatives had anticipated seeing more than 265,000 people come and go.

Thankfully, for many, it's been smooth.

"Looking at some of the lines for security it's looking shorter than I would have expected around this time," said traveler Kendrick Gay, who is heading from Raleigh to Austin.

RDU said its major peak times for crowds were early Sunday morning. They expect another round later Sunday night. To prevent backups at the pick-up curb, they suggest using the hourly parking lot to wait for loved ones.

During those times they said TSA had all lanes at security checkpoints open. They also had them open starting at 4 a.m. Sunday.

All of this was part of an effort to make it an easy departure for people leaving the Triangle. It helped families like the Whalens focus on more important things like saying goodbye to their loved ones.

"Unfortunately my daughter's got to go back to college," said Duncan Whalen. His daughter is a freshman at Central Michigan.