New DHHS headquarters could be another 'jewel' in west Raleigh 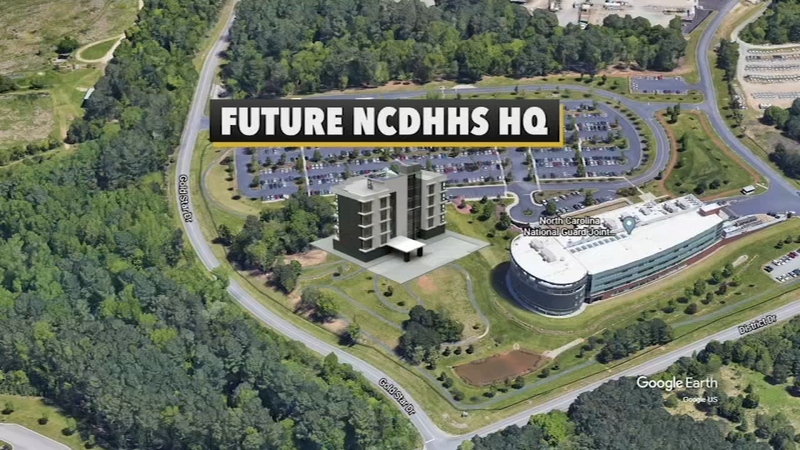 New DHHS headquarters could be another 'jewel' in west Raleigh

RALEIGH, N.C. (WTVD) -- For the past six months, North Carolina's residents have heard from the state Department of Health and Human Resources almost every weekday.

But there's a lot about DHHS that many people may not know, such as the fact that the agency is planning for a new headquarters in Wake County that will consolidate all of its offices and most of its 4,000 employees in one place.

"A critical component of state government right now is health. In these unique times that department is playing a key role in the success of our community," Jeff Murison told ABC11 from his Raleigh office.

Murison is the executive director of the Blue Ridge Corridor Alliance.

The corridor is the area around a three-mile stretch of Blue Ridge Road in West Raleigh.

It includes state-owned land right on the east side of Blue Ridge Road bounded on the south by District Drive and to the north by Reedy Creek Road.

The corridor stretches all the way back to Edwards Mill Road.

The relatively new National Guard Joint Force Headquarters, which houses the state's Emergency Operations Center is on that land as is the Office of the Chief Medical Examiner and the State Laboratory of Public Health and the brand new North Carolina Agriculture Department's Agricultural Science Center.

But the buildings directly across Blue Ridge Road from the North Carolina Museum of Art are old and spread out among open acreage.

"The state land directly across from the museum of art is a little underutilized. It's been the goal of the organization for a decade to see that redeveloped," Murison said.

He thinks putting the new DHHS headquarters there could be a major jewel in the corridor's crown, a crown that already has many jewels.

PNC Arena, Carter-Finley Stadium, the North Carolina State Fairgrounds and some of the sprawling NC State University campus are part of the entertainment and education district.

The Museum of Art and nearby biomedical facilities are part of the arts and research district.

And the Rex Hospital complex, and the constantly increasing medical facilities and offices that surround it, are in the health and wellness district.

Surrounding all of that are vast swaths of neighborhoods including multifamily housing.

"A lot of the partners in the corridor have spent a lot of time and effort to have the highest standards of design, really thoughtful urban planning," Murison said.

The alliance also has an eye toward development that can support affordable housing, according Murison.

And since DHHS has to vacate the Dix property downtown in a few years to make way for the City of Raleigh's planned world-class park, he sees a possible move of its 4,000 employees to the Blue Ridge as a big boost to another world class destination -- the Blue Ridge Corridor.

"The relocation of the Health and Human Services Department to the Blue Ridge Corridor is a transformational opportunity for our community, for the city, and for the department," Murison said. "Adding that many employees and that kind of an anchor institution to any community, no less ours, is really a once-in-a-lifetime opportunity. "And so, we're really embracing this as that chance to redefine and rebrand the corridor."

A spokeswoman for the Department of Health and Human Services confirmed for ABC11 that the plan is in the works.