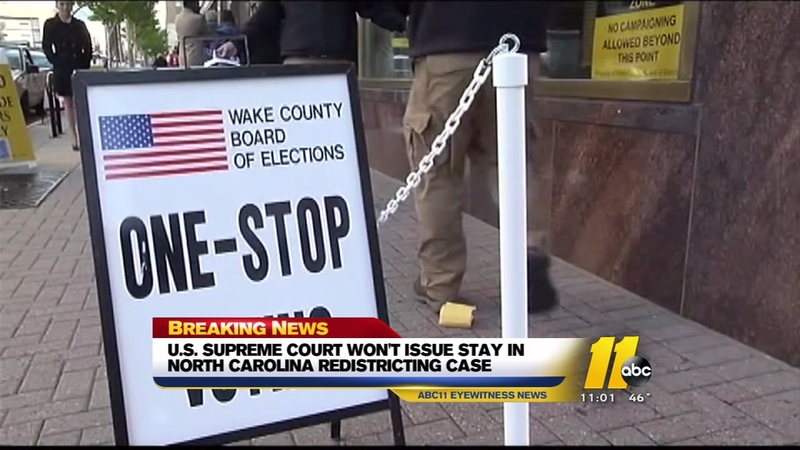 The denial of the state's request for the Supreme Court to intervene came after Republican lawmakers redrew the boundaries as a safeguard to comply with a federal court ruling that called two majority black districts racial gerrymanders. A three-judge panel ordered a replacement map by Friday.

The North Carolina legislature approved new Congressional maps and a change in the primary election date just in time to meet the federal deadline.

Because of the Supreme Court decision, primary elections for all 13 of North Carolina's members of Congress will be held June 7, not March 15.

Republicans were hoping U.S. Supreme Court Chief Justice John Roberts would delay a federal court ruling. But that hope has been dashed.

Many critics say the new maps are as gerrymandered as the old maps, just in a different way.

Dunn Republican David Lewis did, in fact, "freely admit" that on the House floor before today's vote. "I think electing Republicans is better than electing Democrats," Lewis said, "so I drew this map to help foster what I think is better for the country."

The maps, as drawn, are intended to ensure ten Republicans and three Democrats are elected to Congress, the current make-up. But along with giving Republicans a political advantage, some say the maps still don't represent black and Latino voters fairly.

"The Republicans have gone too far in creating districts that do not consider race at all," said Rep. Edward Haynes Jr., from Forsyth Co. "The new maps have marginalized voters and undermined the intent of the Voting Rights Act."

"They've essentially drawn a very capable minority congress member out of a district," said Rep. Martin. "Alma Adams. It's going to be near impossible for her to get re-elected."

"I am absolutely running to continue to be your Congresswoman in the 12th District," Adams said. "While there's still a lot that could change - the proposed maps that the Republicans passed may be illegal - I want you to know that I am committed to serving. I won't let Republicans obstruct the important work we've been doing to protect women's rights, improve our public education system, and fight for the people of North Carolina."

But Lewis maintains, Republicans did their best to comply with the court order. "We adopted new criteria, we explained to them how we were going to draw the maps, the maps look good, they only split 13 counties, and they only split 12 precincts," Lewis said.