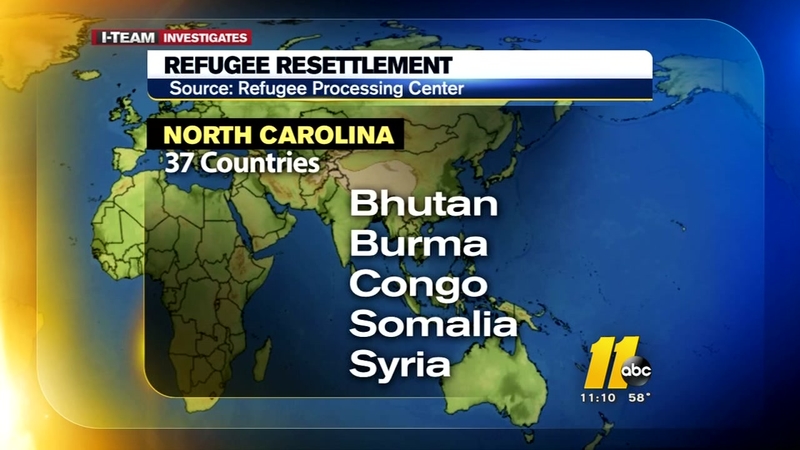 CARRBORO, North Carolina (WTVD) -- North Carolina is among the top 10 states for resettled refugees, and many come from nations that are not affected by President Trump's executive order on travel.

The ABC11 I-Team surveyed the data from the Refugee Processing Center, which tracks the arrivals and destinations of refugees in the United States. In the calendar year 2016, 3,719 refugees resettled in North Carolina, more than 40 other states, including Illinois and Florida.

The data also shows that refugees in North Carolina fled 37 different countries, with most coming from Bhutan, Burma (also known as Myanmar), Congo, Syria and Somalia.

"If you were in our shoes, what would you do?" asked Khin Aye, a Burmese immigrant and owner of the Little Burma Asian Market in Carrboro. "Would you still be living in your current situation or try to do something to make it better?"

Burmese and Congolese refugees have accounted for most of the immigrants resettling in the Tar Heel State. Both nations - Burma in Asia and Congo in Africa - are not included in President Trump's executive order on travel and immigration.

Khin Aye says many Burmese come to North Carolina because of the weather and the economic climate, with many finding jobs in housekeeping at UNC-Chapel Hill and Aramark.

"The weather is a lot like our home country," Khin Aye told ABC11. "It's not too hot and not too cold."

Learn more about refugee resettlement across the US

Education is also a significant draw.

"We work hard for the wages. We are not lazy," Khin Aye said. "I'm the first generation in my family to get a high school diploma, and now I'm going to go to college."

In its 2017 report to Congress, the Refugee Processing Center, under the auspices of the US Department of State, estimates 110,000 refugees will resettle in the United States, up 57 percent in a two-year period.