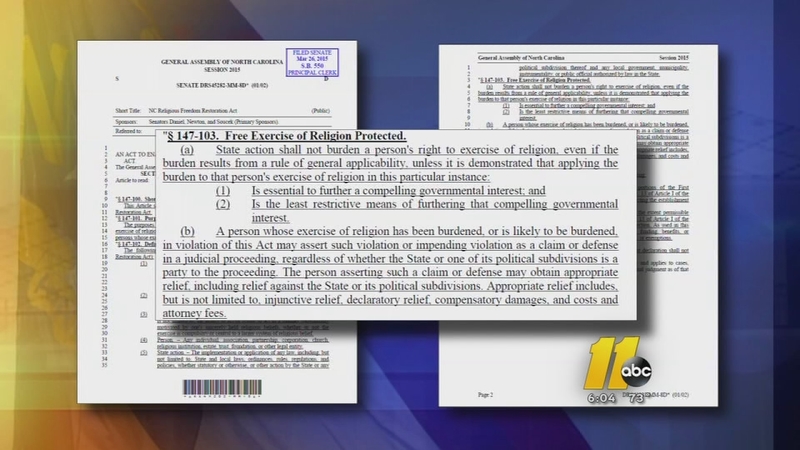 After an enormous backlash in Indiana where a similar law was recently passed, Republicans in the Tar Heel State have taken a more cautious approach.

"My thought is that the high priorities we have right now are about job creation, improving our roads, improving education," said House Speaker Tim Moore (R-Cleveland). "I want to find out how this bill accomplishes those objectives. What does it do to move North Carolina's brand forward?"

"What is the problem they're trying to solve," he asked. "I haven't seen it at this point in time."

Leading the charge for the bill is Rep. Paul Stam (R-Apex). Last week, Stam defended it to ABC11, saying "If you read the bill, you will find that it deals with the actions of state government and local government. That's what it deals with. Can a state or local government order a citizen to do things to which they have sincerely held religious objections? And the answer is no, unless there's a compelling state reason to do so."

However, critics say the bill is about much more than curtailing government overreach.

Preston says the North Carolina Religious Freedom Restoration Act - and other similar bills filed across the country - is coming on the heels of a wave of freedom to marry initiatives and court cases.

"It seems to be in response to that which sends a bad signal to the business community," Preston said. "This essentially let's people object to complying with the law under, any law at all, under the guise of religious freedom."

The pushback to North Carolina's bill hasn't gained as much momentum as that in Indiana. In the Hoosier state, large companies, large cities, and at least one other state (Connecticut) have threatened embargos. Here, groups have been critical, but stopped short of economic threats.

American Airlines put out the following statement: "We believe no individual should be refused service or employment because of gender identity or sexual orientation. Laws that allow such discrimination create an unfavorable social and business climate, are fundamentally unfair, and promote intolerance and division. Laws like this will harm the economies of the states in which they are enacted, and would ultimately be a step in the wrong direction for a society that seeks tolerance, peace and prosperity for all."

Moore said he spent the morning talking to CEOs, both in and out of state, and in every conversation, North Carolina's "religious freedom" bill came up.

"Either they brought it up or I asked," Moore said. "I wanted to find out how are business leaders viewing this legislation because anything we do, we simply need to make sure we don't harm our brand."

Senior Republican leadership in the Senate also told ABC11 on background that any such effort would have to get its start in the House, and it wouldn't likely go anywhere in the Senate anyway.

"We're definitely pleased that the legislature is taking the time to think carefully about this," said Preston. "I hope they're looking at what's happening in Indiana and understanding that this is going to have a lot of consequences that nobody really thought through."