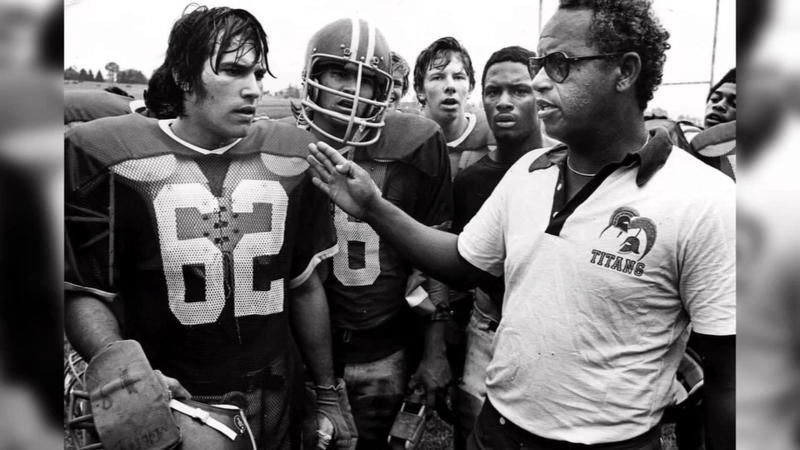 DURHAM, N.C. (WTVD) -- The high school football coach whose story inspired many in "Remember the Titans" has died, according to North Carolina Central University officials. He was 84.

The cause of death was not immediately released.

As documented in the "Remember the Titans," Boone was the head football coach at T.C. Williams High School in a racially divided Alexandria, Virginia, in 1971. Boone united and coached the diverse team and turned it into Virginia's most powerful football team at the time, winning a state championship while navigating the early days of desegregation.

In December 1971, President Richard M. Nixon was quoted as saying "the team saved the city of Alexandria."

With his health declining, Boone was still mapping out football strategy as if he were about to walk the sidelines one more time.

"His daughter said the other night he asked for a clipboard. He started drawing plays," said Aly Khan Johnson, an assistant on Boone's staff in 1972.

Johnson told The Associated Press that the coach died at his home in Alexandria. Johnson said a funeral home operated by his wife is handling the arrangements, which are not complete. He said Boone had been battling cancer,and added that he visited the coach regularly and had planned to see him Wednesday when he learned of his death.

Johnson recalled Boone as being one of the influential coaches in his career and a person after whom he tried to model his own style. Their association went back to the 1960s, when Boone coached at a black high school in Williamston, North Carolina, and Johnson lived several doors down. He said they would sometimes run plays that Boone had drawn up.

"What I picked up from Coach Boone all those years was his dedication to young people, being organized and being persistent in doing what you're doing, planning ahead," Johnson said.

Johnson said he lived with Boone for a month after he graduated from college and recalls how the two would analyze the team.

"I'd watch him take the projector out, point it at the bathroom wall, review plays and so forth, until late at night," he said. "You saw that dedication."

Boone's team at Williams and its initial success was also recognized as a galvanizing factor in helping bring the city through school consolidation.

Much of "Remember the Titans" covers the team's uphill battle to win the state championship against 15 all-white teams. They have to overcome vindictive opponents, racist coaches and crooked referees.

"When I got there, you saw kids work together, hung out together," Johnson said. "It was a brotherhood that you would see. As you know, athletics does something for a community, and it happened at the right time for that community."