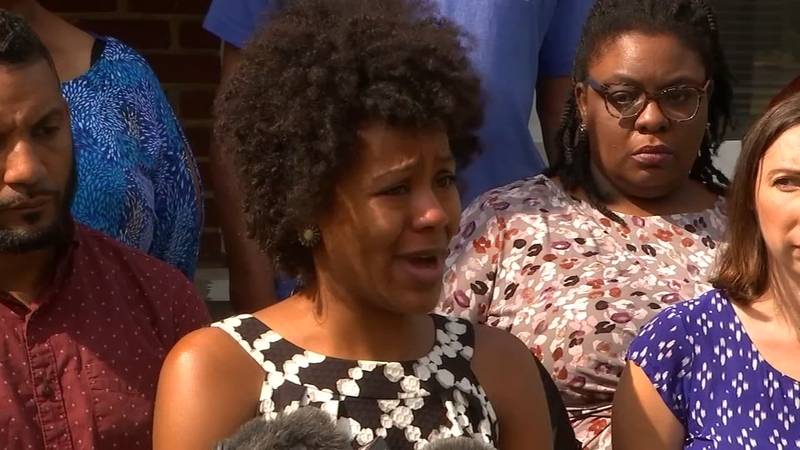 BURLINGTON, N.C. (WTVD) -- In a flourish of fiery emotion, the daughter of the Rev. Curtis Gatewood defended her beleaguered father at a news conference Friday in Alamance County.

Desmera Gatewood said it wasn't her father, a prominent figure in the state's NAACP now beset by allegations of sexual harassment, who asked her to be at the news conference -- it was God who asked her to come out and stand up for her father and her family.

In tears, Desmera Gatewood spoke up for her father's honor.

"You have no idea what we have been through as a family," she said.

No one expected her to attend the news conference. But she took the opportunity to stand up for what she believes.

"If this is about protecting somebody who is a victim of sexual assault, why aren't we in court? Why are we having a trial play out in front of people who do not have context?" Desmera Gatewood asked.

On Wednesday, Jazmyne Childs spoke publicly about an incident she said happened in 2017 when she was a member of the state's NAACP chapter. Childs said she was in a dark room preparing for a colleague's surprise party when she felt Curtis Gatewood's breath on her neck and his private parts against her backside

"I yelled loudly," Childs said. 'Why are you hovering over me? That's gross. Move!' He claimed he was looking for a receipt and then stormed out."

But Gatewood's supporters, including his daughter and the Alamance County Chapter of the NAACP, questioned the timing of the public statement, just one week before Gatewood was set to run for president of the state NAACP.

"It is disconcerting that a black man in America can still be condemned based only on unsubstantiated accusations and hearsay," said Linda Snipes of the Alamance County NAACP.

Desmera Gatewood and the Alamance County NAACP said they believe that the national organization should step in and look into all of the North Carolina chapters.

"I don't know why my daddy keeps coming back to this organization but for some reason, even still, he's fighting to be here," Desmera Gatewood said.

Curtis Gatewood's membership in the NAACP has been suspended pending a hearing by the national organization, based in Baltimore. That means he cannot run for that state presidency.

On Thursday evening, Gatewood fired back at the Rev. William Barber, another high-profile NAACP member, who appeared with Childs at her news conference and said she was telling the truth.