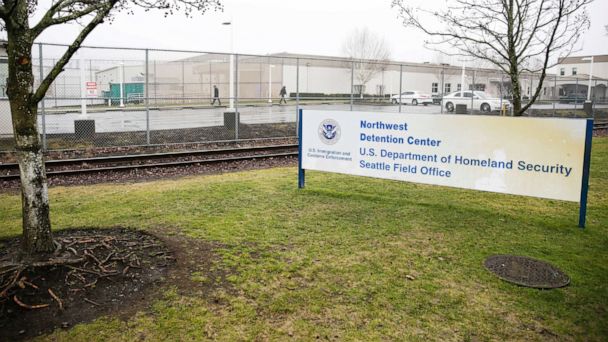 A man armed with a rifle, flares and "incendiary devices" at an U.S. Immigration and Customs Enforcement (ICE) detention center in Washington state was fatally shot by police early Saturday, authorities said.

The man, later identified as 69-year-old Willem Van Spronsen, was allegedly throwing lit objects at buildings at Tacoma's North West Detention Center on Saturday when he was shot following a confrontation with responding officers, Tacoma Police Department officials said in a statement released on Saturday.

A worker first reported that a man outside the facility was armed with a rifle around 4 a.m., Tacoma police said.

"It was reported the male was throwing incendiary devices at the Detention Center and then at vehicles in the parking lot," the statement said. "A vehicle was set on fire. The male attempted to ignite a large propane tank and set out buildings on fire. The male continued throwing lit objects at the buildings and cars."

A rifle was recovered at the scene, police said.

Upon arriving on the scene and locating the man, "officers called out shots were fired," according to the Tacoma Police statement. "Officers noted that in addition to the weapon, he was wearing a satchel and had flares on his person."

Spronsen was identified as a resident of Vashon Island, Washington, just north of Tacoma. Authorities said they had searched the man's home for evidence.

The Tacoma Police Department said it would not release any further information on the shooting until after the officers involved were interviewed.