School protests as Town of Wake Forest holds up its relocation 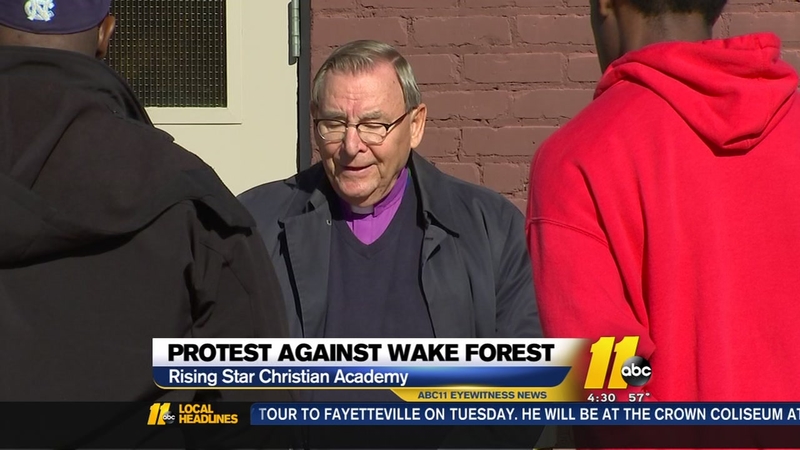 The school wants to move into a former dentist office at 12215 Hampton Way, after having moved four times within the last five months. The pause of moving forward is related to "life safety," as J.J. Carr, director of inspections for Wake Forest, puts it.

Carr says the school needs to put a firewall in the building, which shares a wall with a neighboring beauty salon.

"In this particular case, I don't feel like it's a safety issue they are upholding," said Roxanne Knight, director of Rising Star Christian Academy. "I just believe it's a lot of politics and some other things going on."

During Friday's protest, attended by fewer than 20 people, attendees sang songs and prayed for an exception to be made in this particular case.

Knight said she submitted plans for the school's new location a while back and those plans were approved. She also says the town reneged on that approval and then addressed her about a firewall.

Knight hopes the town will make good on its previous approval and allow the school to move into the Hampton Way location.

Knight then submitted new proposals showing a fire alarm system to be installed, which she says is compliant with direction she received from the NC Department of Insurance.

Knight claims Wake Forest is being unfair; given that the dental office that occupied the Hampton Way space beforehand was not required to have a firewall.

"I hate it's come to this," Carr said. According to Carr, an occupancy permit was available in October. "If they had obtained (the permit) then and maybe started on the work, it might be complete by now."

Knight is hopeful Wake Forest will allow the school to move into the new location by Monday. Carr says "it would be amazing" if that happened.

"We sympathize with Mrs. Knight and her efforts to help the children of the community," Carr said. "But at the end of the day we have to protect the lives of the children."

While Knight understands that, she would like the Town of Wake Forest to extend her school -- which right now serves 20-25 students due to losing many during the moves - an exception.

"When the school was in our home, they let us use airhorns to alert for emergencies," said Knight. "So we're asking the town, let us do the same thing now. Let us use those airhorns, in the place of the fire alarm system, until the system can be installed."

Carr says city code maintains the proper requirements need to be in place prior to having the school begin session on Hampton Way.