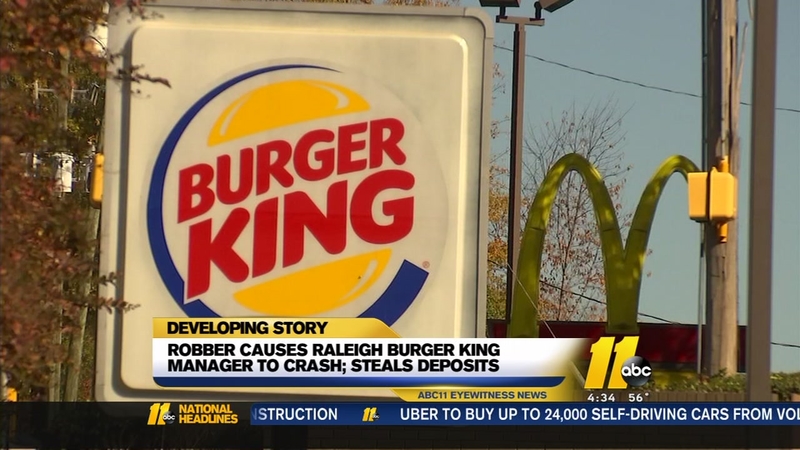 RALEIGH (WTVD) -- Raleigh police are searching for the person responsible for robbing a manager of a Burger King while she was trying to make a bank deposit.

-----------------------------------------
ABC11 has decided to slowly reduce the number of stories on the website that have a comments section. We believe very strongly that our audience should have an opportunity to discuss and debate events in our world, however, we have not been able to moderate the comments as well as we would like. Instead of hosting a platform that could allow a few loud and ugly voices to dominate a conversation, we want to encourage everyone to join us on our social media platforms and speak out there. Facebook: facebook.com/ABC11 Twitter: twitter.com/ABC11_WTVD
Report a correction or typo
Related topics:
raleighrobberyraleigh newscrashraleigh police
Copyright © 2022 WTVD-TV. All Rights Reserved.
RALEIGH NEWS
Congresswoman announces $3M for strollway between Chavis, Dix parks
Will property taxes rise? Raleigh council discusses $1.14B budget
4-car crash causes delays on I-540 near Aviation Parkway
Raleigh park improvements could come with property tax hike
TOP STORIES
Heavy rain, winds knock down trees, power in parts of central NC
Congresswoman announces $3M for strollway between Chavis, Dix parks
Duke pediatrician warns about baby formula shortage impact
Homeless veterans get an assist from Durham's Rotary Club
Truck slams into NC woman's new home
Supreme Court ruling results in 'tragic loss' for death row inmates
Shelf cloud seen in Raleigh ahead of line of storms
Show More
New NC flood monitoring system ready for next big storm
Father puts 1,000 miles on his car to find specialty formula
Student says he was told not to mention 'Don't Say Gay' law in speech
Clayton police arrest man in shooting that injured 1
More than 75,000 pounds of baby formula lands in US amid shortage
More TOP STORIES News