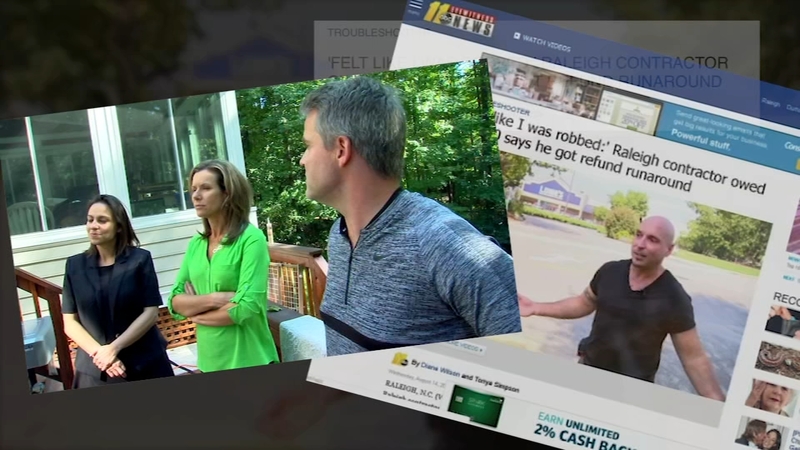 CARY, N.C. (WTVD) -- It is a strange twist to a Troubleshooter story I did a few months ago. In August, we helped Robert Lecei, who owns Reliable Home Services get the money he said he was owed from a home improvement store for materials he says he never got.

After the story aired, we heard from a couple who said Lecei actually owed them money for not doing a job at their home.

Isabelle and Derek Unger said they had a history with Lecei, as he had previously completed work at their Cary home.

When they hired him to replace all of their home's windows, they didn't think there would be a problem.

In all, the Ungers paid Lecei $10,500. As time went on, the Ungers said Lecei told them the windows were on backorder. However, then came more problems.

"Excuse after excuse, it was one thing after the other, medical problems, doctor's appointments," Derek Unger noted.

The Ungers said they were worried that Lecei had their $10,500 for the windows since April, and by the summer still no work was done. Fast forward to August, and they were watching ABC11 and saw the story we did on Lecei.

"Then we saw your segment and actually realized that you had obtained for him over $7,000 of a refund," Isabelle Unger said. "I asked him, 'since you received payment from ABC, are you going to pay us?'"

The Ungers said they heard nothing.

The Ungers got in touch with me, and I reached out to Lecei. It took a while to get him to respond, but he eventually did and took full responsibility for not following through on the Ungers job.

He offered to complete the work but said he needed time to get the money to buy the windows. The Ungers said they didn't understand why he needed money since they already paid Lecei for the windows.

"We asked for a repayment plan, and he has not even attempted to provide any repayment," Isabelle Unger said.

Lecei told me that he has had a couple of very rough months that set him back, but he insisted that he will make it right. When I reminded him of the $7,400 we got for him, he said that money belonged to his parents.

He said health issues have kept him out of work, and he feels horrible about the situation. He said he needs to get some jobs before he can start paying back money to the Ungers.

The Ungers said they are tired of waiting.

"We want to make sure that this doesn't happen to others," Isabelle Unger said. "It's frustrating that people you think will do their work, you know you provide money for services and think they are going to do it."

I will stay on top of this to see when Lecei refunds the Ungers as he has promised. In the meantime, the Ungers have filed a small-claims court action against Lecei.

The Troubleshooter Takeaways are you should not pay for a job upfront, no matter what the contractor says.

If they claim the money is for materials, offer to go with them and pay for the materials yourself and put them in your name. This way, you will at least have the materials.