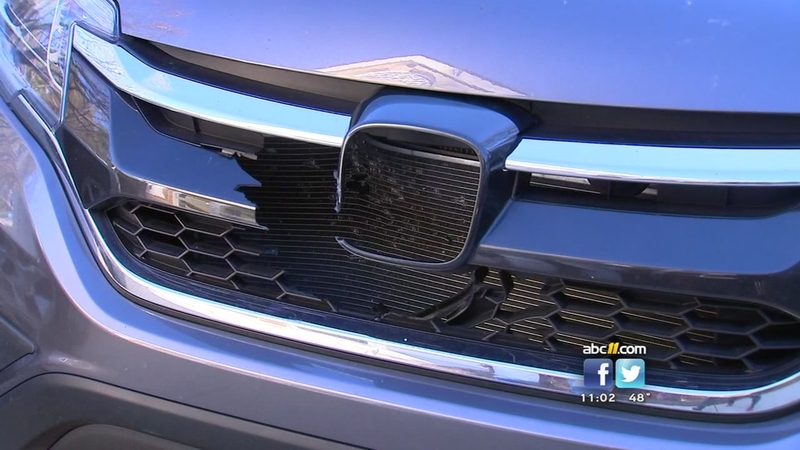 RALEIGH (WTVD) -- The Raleigh Police Department is asking for the public's help Wednesday in identifying who may be behind a string of rock-throwing incidents since mid-August.

RPD said at least seven vehicles reported being hit by a rock or some sort of object while driving in North Raleigh on Tuesday alone.

The most recent incidents happened on Hickory Grove Church Road, Strickland Road, Leesville Road, and Ray Road in the evening.

Teresa Padgett and her 10-year-old daughter were driving home when her Honda CRV was hit by a rock from a passing car.

Damage to the front of Teresa Padgett's vehicle.

"I'm just glad she was in the back seat and it didn't hit the windshield," Padgett said. "It just shocked us."

Catherine Williams' Kia SUV was also struck by a rock Tuesday evening while she was driving on Ray Road. "I was on my way to go pick up my granddaughter," said Williams. "That was the only reason why I was out late."

Williams says her insurance will cover the cost of damage and replace her car's hood.

Padgett, on the other hand, is working with her insurance provider to find out what, if anything, she may be liable for.

"I have no idea," she told ABC11. "I know the radiator's damaged, the air conditioner won't work. I'm sure there's more. But I don't know yet until they take a look at it."

RPD says there was a similar incident between Aug. 15-16 in the vicinity of Tuesday night's occurrences and think they may be related in some way.

Two victims were hurt from broken glass as a result of Tuesday's rock-throwing incidents and were treated at the scene by EMS, according to RPD.

So far, police have not released a description of who may be responsible and have not made any arrests.

But Padgett has a message for whoever is causing damage to passing vehicles.

"I would say they really need to think about what they're doing because they could have killed somebody," she said. "It's really stupid."