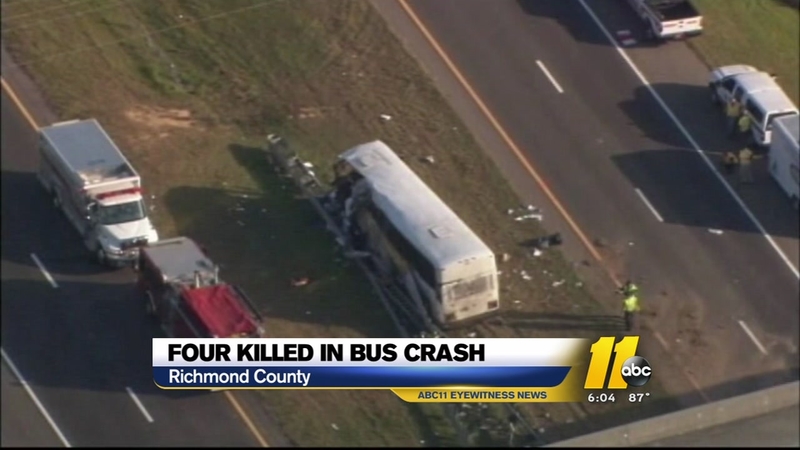 RICHMOND COUNTY (WTVD) -- Highway Patrol has identified the four people who were killed in a bus crash on Highway 74 Saturday in Richmond County.

Forty-two other people were injured after the bus carrying a football team hit an overpass bridge on Highway 74 in Richmond County near Rockingham Saturday afternoon, WSOC reports.

Highway Patrol officials said the front tire of the bus blew and the bus swerved and hit a guard rail. The bus then sideswiped a concrete bridge column.

The bus was carrying members of the Ramah Juco Academy football team, with many of the players enrolled at Clinton College. They were headed from Rock Hill, S.C. to play the University of God's Chosen in Fayetteville, the UGC coach Demetrius Hollingsworth confirms.

The Ramah Juco coach was hurt in the crash.

All passengers hurt in the crash were taken to local hospitals. Authorities say the injuries range from minor to critical.

A 9-year-old child who volunteers as a water boy was sitting at the back of the bus when the tire blew out. Although he was not seriously injured, he was too shaken to talk to WSOC about the crash.

Highway Patrol and the Richmond County Sheriff's Office are investigating.