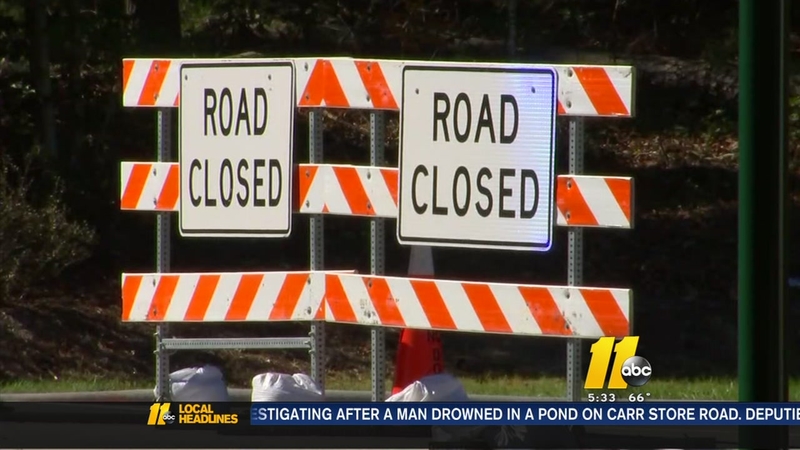 WAKE COUNTY, NC (WTVD) -- Rogers Road in Wake Forest and Rolesville has been closed at two spots for quite some time.

Work started on a bridge widening near Forestville Road during the summer. Then flooding from Hurricane Matthew washed out another part of Rogers Road near the Heritage Gates neighborhood.

While he's happy to not have been on the road when it collapsed, the timeframe to get the road back to what it was is taking longer than he expected.

This is what it looks like on Rogers Road near the Heritage Gates neighborhood road closure from Matthew flooding.

Now Merrill and his neighbors say drive time to run errands and take their children to school has gotten longer.

"A normal drive to Harris Teeter would be five minutes, now we have to go all the way around, it's probably at least 20, 25 minutes," Merrill said.

The NCDOT said the contractor has started staging equipment at that site and is expected to begin excavating material out of the hole early next week.

Crews are making room to install a bigger culvert to replace the one that was washed out during the flooding. That culver is custom made for that location and the NCDOT said it's scheduled to arrive on Nov. 18 or 19. Officials point out that it does come in sections and once it's put together, the contractor then has two weeks to install it and repair the road.

The timeline for that re-opening is late November or early December.

Meantime, the NCDOT said the bridge widening on Rogers Road near Forestville Road was needed because when it was a two-lane bridge it was safe, but needed more constant and costly repairs. It says the five-lane bridge with sidewalks is more pedestrian friendly and will ease traffic congestion in the area. On Tuesday, one lane in each direction will be open to the public.

The Wake Forest community is so happy about that that the Wake Forest Area Chamber of Commerce, as well as businesses in the area are hosting a "Rogers Road Bridge Reopening Celebration.

That's scheduled for Saturday, Nov. 12, from 10 a.m. to 2 p.m. in the parking lot of the Heritage Pointe Shoppes on Rogers Road.