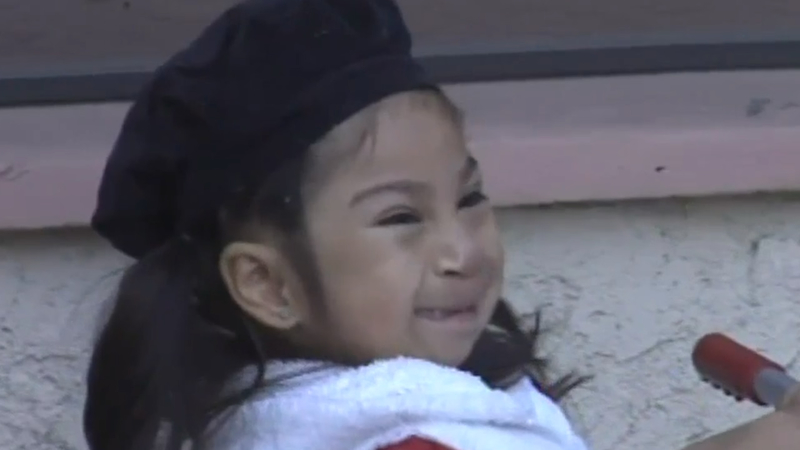 SANTA ANA, Calif. -- A little girl whose customized wheelchair was stolen and later returned in Orange County received a big surprise on Thursday thanks to the kindness of strangers.

Rosa Perez and her 4-year-old daughter Milagros Perez were all smiles as they arrived for a special ceremony where they were presented a check.

"$28, 448, this is in addition to the $3,000 that was donated on the night of the theft," Sgt. John Franks with the Santa Ana Police Officers Association said.

Members of the police officers association gave the Perez family a check, made up of hundreds of donations mailed in with cards.

"We would like to again say thank you to all the community members for their generous support," Franks said.

Milagros was born without legs and suffers from other medical issues.

Just before Thanksgiving, someone stole her customized wheelchair from outside her family's home.

The officers who responded brought a Christmas tree and gifts to comfort the little girl.

Days later, someone returned the wheelchair, but not before Milagros' story touched people around the country.

Milagros' mother said she was overwhelmed with happiness and didn't believe her family would get this much help from the community.

Putting more smiles on the faces of Milagros' family, she opened some gifts that were sent to her as early Christmas presents.

Members of the police officers association said they are glad they could help.

"She's a sweetheart, just this smile. And her vivacious attitude. And just her family as well," Franks said.

Rosa Perez said she plans to spend the money on her daughter's healthcare and hopefully finding a new, bigger home for her family.

Milagros means "miracles" in Spanish, and the family and officers said the outpouring of support from the community is nothing short of a miracle.