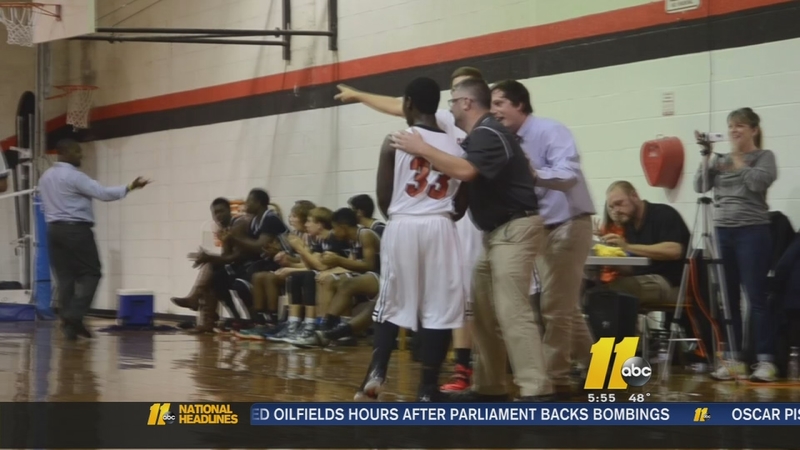 ROXBORO, N.C. (WTVD) -- Tylette Green Cash never imagined her son, who has a rare neurological disorder, would be on his high school's basketball team. She couldn't believe when he was given a chance to play at the school's first home game, and the whole gym roared when he made a basket.

"It was awesome, just to be able to see him go out there on that court, and just give it all he had," Cash said. "It's his life dream to play basketball and to see him do that, I couldn't hold it together."

Watch the video of J.J. making the shot here.


Her son, Jamion Cash, has Kernicterus and plays for Roxboro Community School. The school played Durham's Research Triangle High School Wednesday, and everyone gave a standing ovation when J.J. got a chance to play.

Both teams made way and the referee gave Jamion, or J.J. as friends call him, a chance to shoot. After a first try, he scored.

"My favorite sport is basketball," Cash said. "I love my coach and my teammates."

His coach, Justin Bettendorf, says J.J. has approached him about playing for the team since middle school.

Bettendorf said J.J. shows up to every single practice on time, and even joined in on the summer session before his freshmen year.

"We got near the fourth quarter, we had a little bit of a lead - that was sort of our inspiration to keep the lead and finish strong, was 'cause we wanted to get J.J. out there," Bettendorf said.

He said his goal was for J.J. to score before the end of his senior year, and is thrilled that he made it on his first game.

Jamion's mother says she's grateful to everyone who made it happen.

"Thank you, thank you so very much for allowing him to just do it, and the other team came up, they had so much team spirit," Tylette said. "And we just love the team spirit that has been shown upon Jamion and our family. "