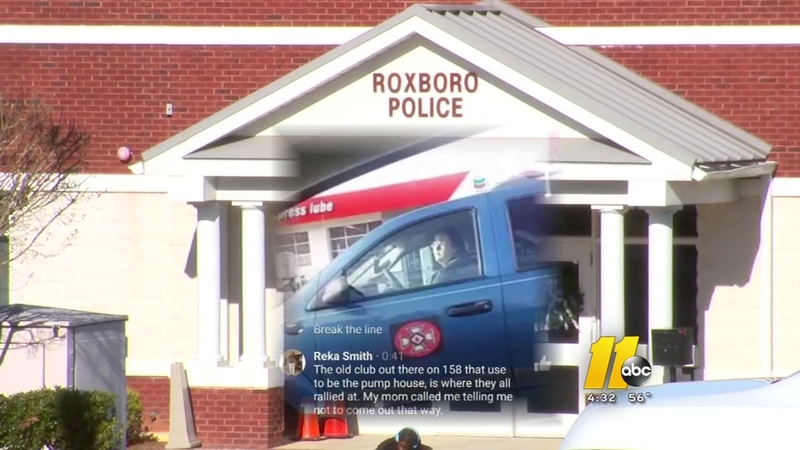 About 20 people in vehicles displaying KKK and Confederate flags went through Roxboro. Police blocked several intersections and the group was out in about five minutes.

Hess began the news conference with a personal statement.

He said that as a parent and husband he had to have an uncomfortable conversation over the weekend.

"I share in your pain, anger, and displeasure with the group choosing Roxboro," he said.

Hess told reporters that police used an unmarked car to lead the group through the city. Police were notified that it was occurring less than an hour before the event.

He said they used a lead car to expedite the drive and it was unmarked to not draw additional attention.

An alternate route for the group was discussed beforehand but law enforcement officials agreed that it would potentially require more police resources. Hess also noted that there could have been violence if the KKK was separated or deviated from a new route.

Hess reminded the public that police routinely escort a variety of groups through the city including charities and non-profits, as allowed by state law.

Some residents disagree with the decision.

"That's taxpayers money," Jermaine Wallace, a resident, told ABC11. "There are a lot of other things police can be doing besides escorting a hate group."

Wallace recorded a Facebook Live of the event but it was eventually taken down.

Hess repeated that the city and police do not agree with the KKK and what they stand for, but they could not legally stop them from driving in the city.

He said he understands the outrage from citizens but called on the community to support peace.

None of the KKK members were from the Roxboro community, according to police.

The City of Roxboro acknowledged the group's First Amendment protections but said they would not tolerate any actions against citizens by groups who have a mission of racial, sexual, religious or any other kind of intimidation.

A prayer vigil will be held Tuesday at 7 p.m. at New Mount Zion Baptist Church as a way to heal.