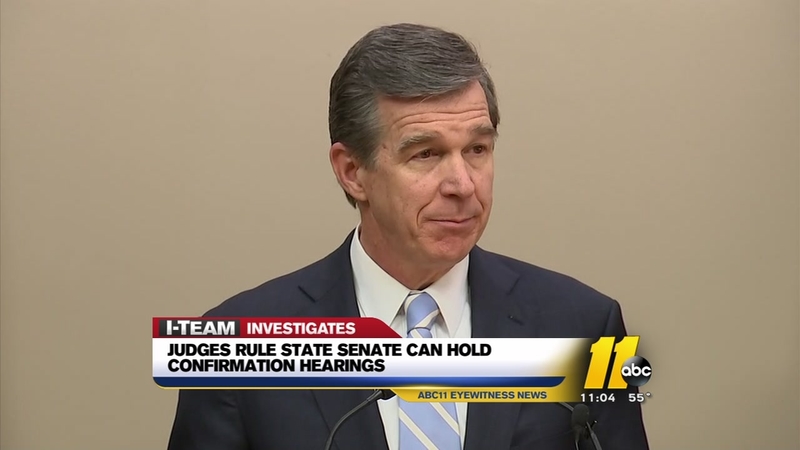 RALEIGH, North Carolina (WTVD) -- If Republicans get to hold their hearings, at least one member of Gov. Roy Cooper's Cabinet will have some pointed questions to answer.

In a letter obtained by the ABC11 I-Team, the State Ethics Commission confirms it found "the potential for a conflict of interest" pertaining to Michael Regan, the newly-appointed Secretary of the Department of Environmental Quality.

Specifically, the letter notes Regan worked for a firm that provided environmental consulting and that he was directly involved with the Environmental Defense Fund, an environmental advocacy non-profit.

"Because of these associations, Mr. Regan should exercise appropriate caution in the performance of his public duties," the letter states, while also mentioning in bold that the commission does not disapprove of Regan's appointment.

ABC11 obtained the letter on the same day a panel of three judges ruled against the Governor's challenge that the North Carolina Senate can hold confirmation hearings on Governor Roy Cooper's cabinet picks.

House Bill 17, passed late last year by the GOP-controlled General Assembly, sharply reduces the number of appointees to state government that Cooper can make and required all of Cooper's top agency heads to be approved by the Senate, among other executive powers.

"The idea is that the more transparency on these things, the better," Senate Pro Tem Phil Berger (R-Guilford and Rockingham) told ABC11. "I think the fear or refusal to allow that process to take place has some people asking -- what is it about folks that the governor doesn't want us to know?"

Cooper won an early stay of the law, but Tuesday's ruling means Senate hearings can proceed, at least until the March 7 hearing that will ultimately decide the constitutionality of HB17 and Senate Bill 4, another law pushed through late last year.

According to state law, however, the governor has until May 15 to submit names to the Senate for "advice and consent," even if they have already been sworn-in.

"The three judge panel has made clear that the 'Senate cannot begin the advice and consent process until the Governor submits a nominee.'" Cooper spokesman Ford Porter wrote to ABC11. "The panel also found that the Governor has not submitted his nominees and has until May 15 to do so. The Governor plans to wait for the full hearing on the constitutionality of this law to go forward on March 7th before submitting his nominees, which he believes will not be necessary."

"It is incredibly encouraging that this court has shown judicial restraint and rejected Gov. Cooper's extraordinary request to stop the people's elected representatives from conducting a fair, open and transparent hearing process to determine whether his proposed cabinet secretaries are qualified, without conflicts of interest, and willing to follow the law."