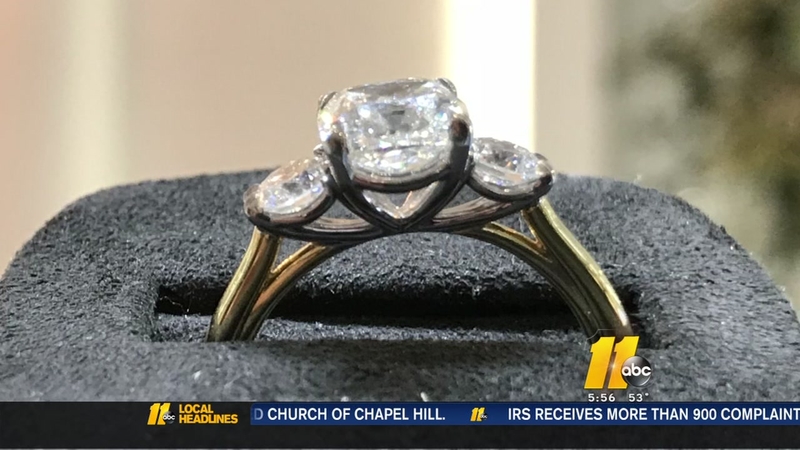 RALEIGH (WTVD) -- We're months away from the next star-studded royal wedding. The world will be watching when Prince Harry and American actress Meghan Markle walk down the aisle in May at St. George's Chapel.

Prince Harry is off the market and now the ring Markle's been rocking is on.

A copy of her dazzling engagement is for sale.

"It's simple but elegant," said Raleigh resident Christine Whitley as she tried it on for size. "I wouldn't expect anything more elaborate than this."

The look-alike was made by Bailey's Fine Jewelry; two replicas have already been ordered at the Cameron Village store.

"This is an internationally famous look and famous ring, and it will be for quite a long time to come," said owner Clyde Bailey Sr. "It's a classic, and what Prince Harry did was give something his bride-to-be something that she'll cherish for a lifetime. "

The center cushion-cut near colorless stone is a carat-and-a-half. There are two round brilliant-cut diamonds on either side and it's set in high-quality 18-carat gold.

ABC11 went inside the jeweler's workshop. The master craftsman showed us the cast model and renderings.

"We can build it, change any detail," explained Chris Stickland.

The engagement ring itself is modern by royal standards; precious stones are often picked.

That was the case for the late Queen mother - who could forget Princess Diana's iconic sapphire, which was passed down to the Duchess of Cambridge.

Prince Harry did use some of Diana's diamonds in the design but by choosing a white diamond center stone, it appears the stylish Markle is bringing some American flair across the pond.

If you want to sparkle like a royal, you will need some riches.