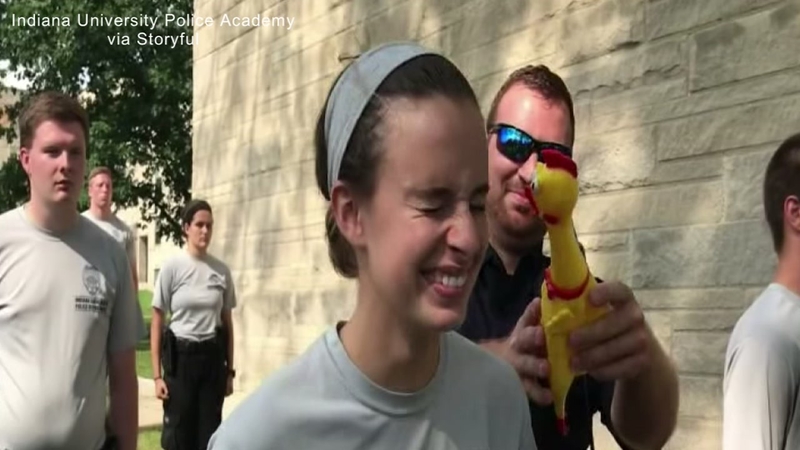 BLOOMINGTON, Indiana (WTVD) -- During training, police cadets endure many exercises that test their skills and abilities. But for students at the Indiana University Police Academy (IUPA), the hardest test they'll face is probably the "chicken test."

IU Police Academy is buzzing on social media after they used a rather unconventional way to test their trainees.

A video, shared to the organisation's Facebook page, shows an instructor squeezing a rubber chicken into cadets' ears and faces.

The point? To see whether they will remain focused like a seasoned officer or burst out laughing. And the results are hilarious!

Several trainees smile or burst out laughing as the yellow devil squeals in their face. Then, they quickly drop to the floor to complete their punishment--a round of push-ups.

IUPA posted the video Monday saying, "The Chicken Test - Designed to test a cadet's demeanor, focus and sense of humor! Not bad..."

The video has been viewed more than four million times.

Officials said they thought it would be a nice way for the officers-to-be to have a little fun.

"This is the first time we've conducted the test at the IU Police Academy," the police academy told a local station. "One of our instructors saw it elsewhere, and we thought it would be a nice way to have some fun and let off some steam."

The tested cadets are in their final week of the academy. After graduation this weekend, they'll become certified law enforcement officers.