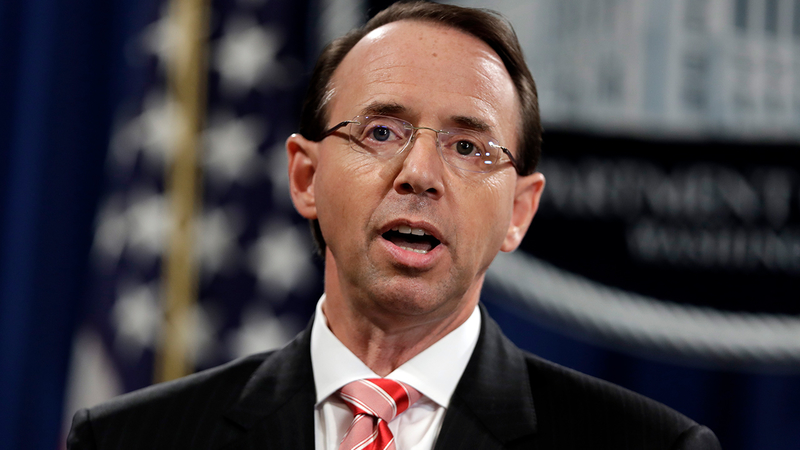 The indictments were announced Friday by Deputy Attorney General Rod Rosenstein as part of the ongoing special counsel probe into potential coordination between the Trump campaign and Russia.

The Russians are accused of hacking into the computer networks of the Democratic National Committee, the Democratic Congressional Campaign Committee and the presidential campaign of Hillary Clinton, and then releasing stolen emails on the internet in the months before the election.

"The internet allows foreign adversaries to attack Americans in new and unexpected ways," Rosenstein said. "Free and fair elections are hard-fought and contentious and there will always be adversaries who work to exacerbate domestic differences and try to confuse, divide and conquer us."

Before Friday, 20 people and three companies had been charged in the Mueller investigation. That includes four former Trump campaign and White House aides and 13 Russians accused of participating in a hidden but powerful social media campaign to sway American public opinion in the 2016 election.

Rosenstein, who said he had briefed President Donald Trump on the indictment, said there was no allegation that the hacking altered any vote count or that any Americans were knowingly in communication with any of the Russian officers.
Report a correction or typo
Related topics:
politicsrussiaelection
Copyright © 2022 by The Associated Press. All Rights Reserved.
TOP STORIES
Snow falling in some areas, expected to last until sunrise
New study highlights where you are most likely to catch COVID-19
NC man denied life-saving kidney transplant over vaccination status
Widow delivers heart-wrenching eulogy for NYPD detective
In wake of Pittsburgh bridge collapse, how safe are NC's bridges?
Restaurants, battered by wintry weather, hope business stays brisk
News & Observer: There are 54,000 possible Cook Out combos
Show More
Cooper vetoes bill that would push NC primary to June 7
How many times can I reuse my N95 mask?
10 injured in PA bridge collapse; human chain formed to help
Decades after TV anchor disappears, convicted rapist denies connection
LATEST: Breakthrough cases make up 37% of new COVID infections
More TOP STORIES News