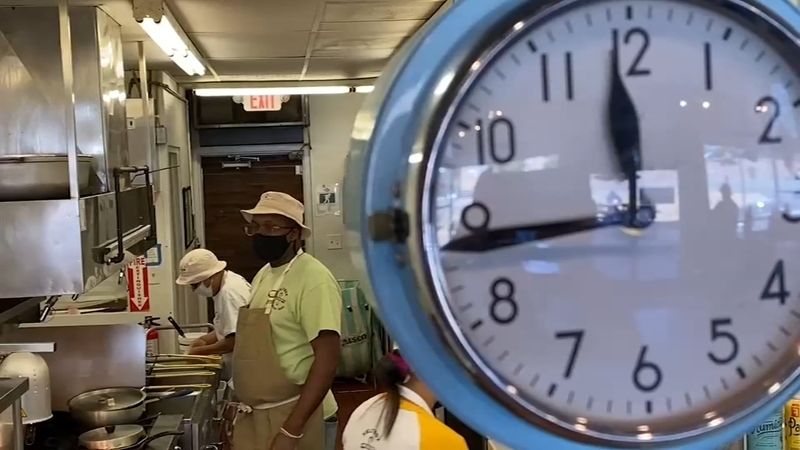 DURHAM, N.C. (WTVD) -- Head chef and owner of the Saltbox Seafood Joint, Ricky Moore, is celebrating Black History Month by tapping into his culinary roots and serving up a bit of culture with every bite.

The restaurant is serving up a new special every Wednesday for the month of February.

The Durham favorite is known for its soul food and food sells out quickly. Folks travel for fresh catch fried fish and honey hushpuppies.
Moore, a James Beard semi-finalist for Best Chef in the Southeast, wants his customers to leave full and filled with a new perspective this Black History Month.

"These dishes are delicious and they're unsung. Nobody speaks to them or talks about them," he said.

The Saltbox Seafood Joint is taking on #BlackHistoryMonth from a culinary standpoint. The owner is serving certain specials every Wednesday influenced by black culture from around the world. He’s hoping to offer customers a bit of culture with every bite. #ABC11 #BHM pic.twitter.com/PoRqo5hbLw

This Black History Month, Moore is celebrating the influence pan-African culture has had on food.

"I researched the Atlantic Slave Trade and where flavors landed. They also influenced the culture and the food, so for me, that was an important piece," said Moore.

The special on the first Wednesday of the month is a dish with deep roots out of the Mississippi Delta: catfish and spaghetti. A traditional red sauce isn't used in the pasta, instead, the base is saltier and done with capers.

"I saw it in a restaurant where B.B. King used to eat all the time," said Moore.

Next Wednesday the special is 'Bake and Shark', a popular sandwich sold widely throughout Trinidad and Tobago. Battered shark is placed between baked bread dressed in pineapple, tamarin, and cilantro sauce.

"I've spent time in Tobago. I've experienced it. I've tasted it," he said.

The restaurants' goal is not to completely remake dishes, but rather add his own Saltbox spin.

"The ones that I chose, obviously there's many more, but these are ones that I take pride in and they're delicious and I like cooking them," said Moore.

The schedule for the rest of Black History Month are: