Sam's Club closing stores across the U.S., including Morrisville location 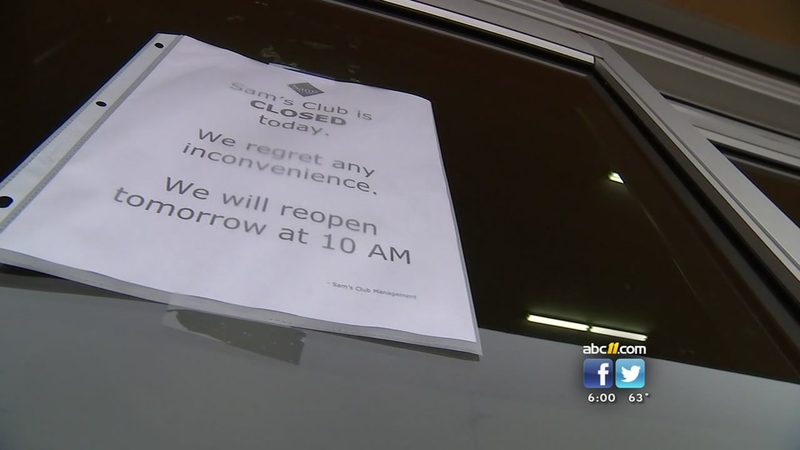 MORRISVILLE, NC (WTVD) -- Sam's Club is set to close a series of clubs across the United States, according to a statement released by the company on Twitter.

"After a thorough review of our existing portfolio, we've decided to close a series of clubs and better align our locations with our strategy. Closing clubs is never easy and we're committed to working with impacted members and associates through this transition," the tweet read.

Employees at the Morrisville location reached out to ABC11 to say they showed up to a closed store today and that in two-weeks it will be closed permanently.

"Got a call today to not come in to work and I asked why and didn't get an answer," said one employee, who didn't want to be identified. "So I wanted to come an see for myself."

When you search for the Morrisville location on samsclub.com, it's no longer listed. Although the store was closed Thursday, it will reopen Friday at 10 a.m. and then close to the public for good on January 26.

The world's largest private employer said it was closing 63 of its 660 Sam's Clubs - including Morrisville and another location in Lumberton - during the next weeks, with some shut already. Ten are being converted into e-commerce distribution centers, according to a company official who spoke on condition of anonymity because he was not authorized to discuss details of the decision publicly.

He said it was too early to say how many people overall would lose their jobs since some will be placed at other Walmart locations or rehired at the e-commerce sites. Making Change at Walmart, a campaign backed by the United Food and Commercial Workers International Union, estimates that 150 to 160 people work at each Sam's Club store, meaning the closures could affect about 10,000 people.

The decision leaves the Triangle with four Sam's Clubs to choose from - west Durham, north Raleigh, a Raleigh location south of downtown, and a newer location in Wake Forest.

"Wow! This is a shock to me," customer Valeria Shropshire of Durham told ABC11. "I did not know that and here is other customers pulling up too. Nobody told us anything and we have Sam memberships."

Shropshire said she feels bad for the employees.

"I feel sorry for them. They had no prior warning or anything. And now they got to go find other jobs. It's sad. It is sad," she said.

"I know they're going to get severance pay if they are being laid off," he said. "They'll get a severance package of some type. And they need to just start hustling to find a job. And there are lots of jobs around."

Walmart announced years ago that it would actively manage its store portfolio as it strives to put a dent in Amazon's dominance online. With Thursday's closing, that strategy is now extending to Sam's Club.

Online retailers typically pay warehouse employees who pack and ship orders more than store jobs pay. Job postings at an Amazon warehouse in Ohio, for example, offer a starting pay of $14.50 an hour.

"This is about the evolution of retail," said Michael Mandel, chief economic strategist at the Progressive Policy Institute. "The rise of e-commerce is leading to higher wages."

"We've had an immediate increase in Sam's Club members joining BJ's Wholesale Club. Sam's Club members can sign up for membership at their local BJ's and begin shopping -- and saving -- immediately. For added convenience, new members can download the BJ's app, which includes Add-to-Card coupons for automatic savings. We've also had numerous inquiries from Sam's Club employees. BJ's Wholesale Club is hiring, and anyone interested in joining our team can go to bjs.com/careers or visit their local club."