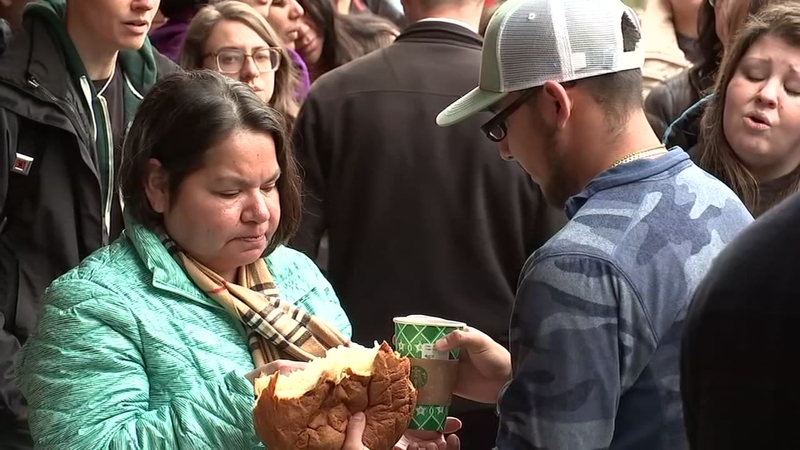 RALEIGH, N.C. (WTVD) -- Supporters of Samuel Oliver-Bruno, an undocumented immigrant who was detained by ICE on Friday, gathered at the Wake County Detention Center on Monday.

Oliver-Bruno's wife, Julia, and their 19-year-old son, Daniel Oliver-Perez, attended, as did some clergy members, including the Rev. William Barber.

Oliver-Bruno had been living at CityWell United Methodist Church in Durham for nearly a year.

RIGHT NOW—Supporters of Samuel Oliver-Bruno, who was detained by ICE during an appointment at the immigration office in Morrisville, are gathering at the Wake County Detention Center. #ABC11 pic.twitter.com/0xFKZGq99k

Oliver-Bruno left the sanctuary Friday to go to an appointment at the immigration office in Morrisville since he was seeking deferred deportation. That's when Alerta Migratoria NC, an immigrant advocacy group, said plainclothes ICE officials detained him.

Twenty-seven people were arrested Friday when they refused to move and blocked the government vehicle containing Oliver-Bruno. Oliver-Perez was charged with assault on a government official. Witnesses said he was trying to keep ICE officials from taking away his father.

ICE said Oliver-Bruno was arrested in 2014 for trying to enter the country illegally through El Paso, Texas, using fraudulent documents and that he has no legal basis to remain in the United States,

"ICE has committed to allow Mr. Oliver-Bruno to remain in the U.S. in detention while his case is adjudicated. While this means he will not be immediately deported, we remain committed to fighting for his release."

According to ICE's online information, Oliver-Bruno is being held at Stewart Detention Center in Lumpkin, Georgia.

On Monday night, Butterfield and Price issued a joint statement after the lawmakers said ICE had informed them that Oliver-Bruno's petition for deferred departation had been denied:

"Mr. Oliver-Bruno's case exemplifies the anti-immigrant agenda of the Trump administration. Mr. Oliver-Bruno - a decades-long resident of North Carolina with no significant criminal history and a loving family that includes his U.S. citizen son - was forced into hiding, taking sanctuary in a church to avoid being deported and leaving his sick wife without medical care. He was given strict instructions to appear at a USCIS office to provide fingerprints for his application to defer his deportation, and when he did so, he was abruptly apprehended by ICE and shipped off to a detention facility to await a sham appeal. For one immigration agency under DHS to advise he follow a legal recourse, while another DHS agency plots to apprehend him in the process, is a miscarriage of justice.

Since his arrest, we have continually reached out to the Department of Homeland Security to ascertain the circumstances of his arrest and advocate for his release while his case is adjudicated. We have been largely ignored or delegated to junior staff in this pursuit, all while USCIS was working behind the scenes to deny his appeal, which we received notice of late this evening.