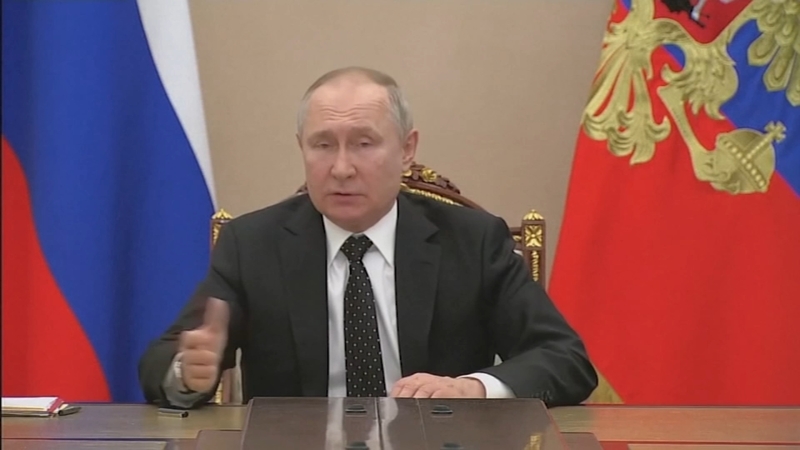 RALEIGH, N.C. (WTVD) -- Escalating sanctions by the US and NATO allies against Russia have severely impacted its economy, as Thursday marks one week since fighting began in Ukraine.

Thursday, the White House announced new sanctions, targeting Russian governmental officials and oligarchs, which prohibit their ability to travel in the US, and leaves their property vulnerable to seizure.

"On the oligarchs in particular, there's debate about how much they control. Who controls who. Is it the oligarchs controlling Putin or Putin controlling the oligarchs? But I think cinching down on their assets is an important part of this," said Mark Nance, an Associate Professor of Political Science at NC State, who serves as Director of the Master of International Studies program in NC State's School of Public and International Affairs.

While Thursday's measures were more targeted, other measures have had a larger, more general effect in Russia.

"Chaos, I think really. The ruble had the largest drop ever in one day, it's down to historic low levels. We've seen the stock market close for a few days. We've seen interest rates double in one day from 9.5% to 20%," said Nance.

Two of the highest-profile moves included disconnecting banks in Russia from SWIFT and barring its Central Bank from accessing reserves overseas.

"By cutting off the Central Bank and not allowing it to have access to reserves in the US and other places, it really starts to cram pretty quickly on the economy and put a stranglehold on it. So there's really not money to pay for even the basics," Nance explained.

These measures aimed at applying pressure on the Kremlin by limiting its ability to operate.

"This targeting of the Central Bank and (cutting ties with SWIFT) is unprecedented. That to me is a signal that the Allies are very serious about this. And yes, the goal is to offset the strategy of the regime, to find ways to insulate itself from sanctions. So they plan for this to have an effect, and I think the goal ultimately is as the war drags on, you're unable to physically pay for the war, much less the lights on at home," said Nance.

As fighting has ramped up, so has international pushback from private businesses, athletic governing bodies, and cultural institutions. Formula 1 terminated its contract with Russian Grand Prix, FIFA banned Russia's team from participation in the 2022 World Cup, and Russian and Belarusian athletes were kicked out of the Paralympics; Belarus is aiding Russia with their invasion in Ukraine.

Private companies ranging from Disney (the parent company of ABC11), Apple, Spotify, H&M, Ikea, Shell, BP, and others have announced plans to close offices or pause operations in Russia in response to the violence.

On top of these steps, several rallies have been organized both across the US and in other countries, expressing solidarity with Ukraine. Thursday afternoon, UNC students, faculty, and Ukrainian natives gathered on-campus to raise funds and show their support.

"I'm worried about my parents for sure. My dad serves in the Ukrainian Armed Forces, and he is currently on the front (lines) fighting for our country and defending my family and all other Ukrainian families. So yeah, I'm just very worried about them," Tyshkoets said.