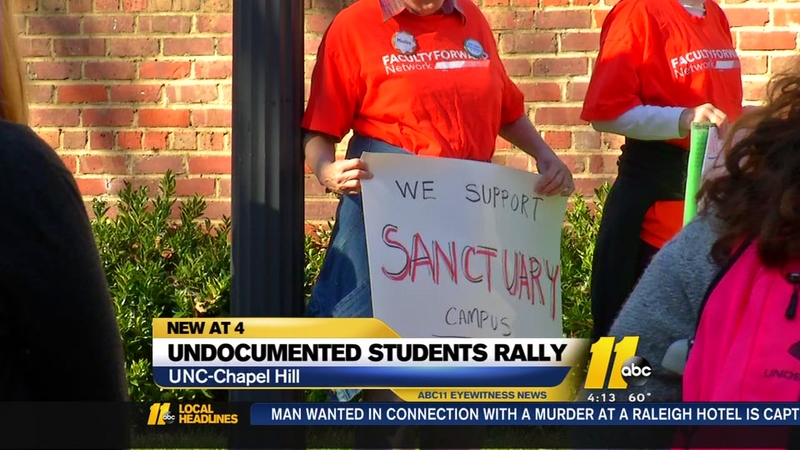 CHAPEL HILL, North Carolina (WTVD) -- Dozens of students at UNC Chapel Hill are calling on school leaders to take steps to protect undocumented students, in the wake of President-elect Donald Trump's strong stance against immigrants who are not legally in the country.

Several students and professors took to the mic in a town hall in front of the administrative building on campus before delivering a letter signed by more than 3,700 people with several demands, asking the university to not share information or comply with Immigration and Customs Enforcement and declare the campus a sanctuary school.

Read the letter from UNC students and professors here.

The University has replied by pointing to a message sent out to everyone in the campus community early last month, which they said "reaffirms" their "commitment to diversity, including differing beliefs and opinions."

"For me this is very personal," Sostaita said. "It is tied to those people that I love and call my chosen family. I have a lot of friends with DACA who are scared that they'll lose their jobs or their scholarships come January."

What do you think? Do you think UNC should become a sanctuary school? https://t.co/Yr7EEXNZ6f

Several students said they will be eagerly awaiting the university's response and said this would not be their final demonstration on this matter.