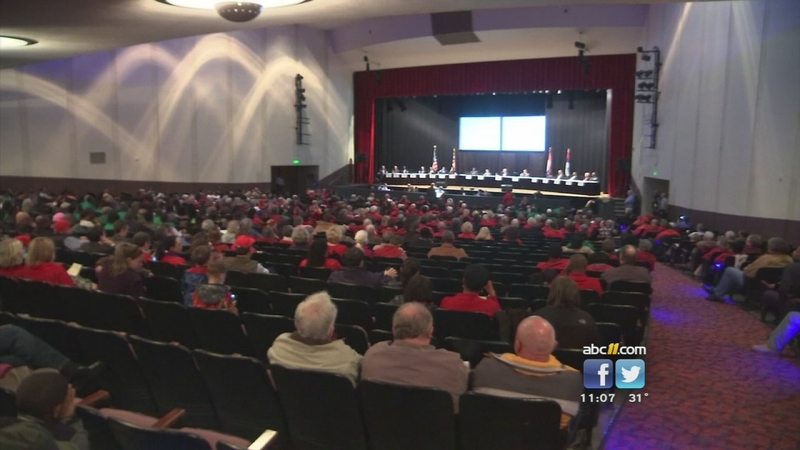 One-by-one, nearly 150 residents lined up to weigh in on the proposed Sanderson Farms facility. Some gave city and county leaders a tongue lashing while others gave pleas for jobs.

"I am insulted that this is what you would want to bring to this town. Insulted that these are the jobs you want to give these lovely people," said one speaker.

"Some of you say we can do better than Sanderson Farms, and I want to say had it not been for this kind of job, I would not be who I am," said Jeffrey White.

It was an epic battle with those wearing green shirts supporting Sanderson Farms incentives and those in red shirts opposing tax credits and other incentives to lure the company to build a nearly $100 million poultry plant in a county-owned business park east of Fayetteville.

Opponents argued the plant would foul the water and air.

"The smell in downtown is already terrible," said one speaker. "You guys know you are downtown, and I can't imagine what the smell would be like with 5 million more chicken carcasses a month."

It's a war of words residents have waged for nearly eight months -- damaging the environment or an economic boost from 1,000 new jobs.

County commissioners and city council members show little if any reaction to a parade of speakers and arguments that have been voiced in previous public forums.

Several speakers said leaders have to cut bait or fish.

"You are not going to do something stupid. You are smart people and we should know that we are talking like you are a bunch of nitwits and you are not," said Willie Williams. "We know you're going to check this stuff out. Check these places out."

Sanderson Farms has said they are no longer considering Cumberland County for a location. County commissioners expected to vote on an incentives offer later this month. The city will follow suit if Sanderson Farms' accepts the offer.