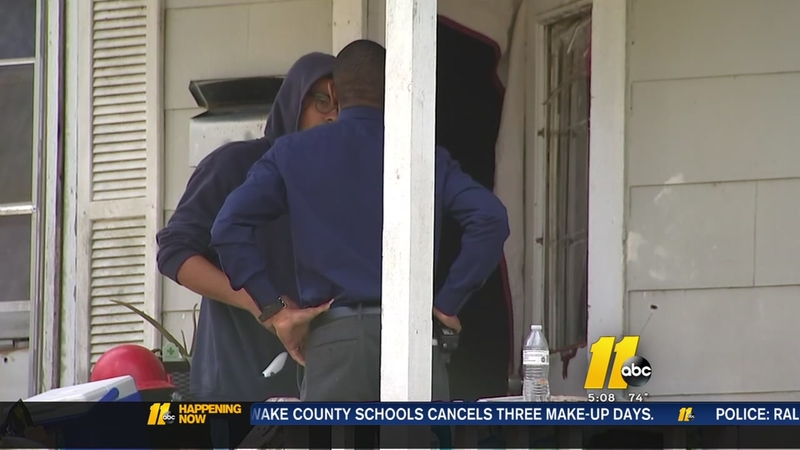 SANFORD, N.C. (WTVD) -- A 41-year-old man is dead after an officer-involved shooting in Sanford Tuesday night.

Officers responded to the 400 block of Goldsboro Avenue around 10:21 p.m. for a report of a disturbance.

According to the department, when officers arrived, they encountered 41-year-old Juan Carlos Romero who was armed with a handgun.

Police say Romero then fired at the three responding officers.

The officers fired back, shooting and killing Romero.

Romero's family told ABC 11 on Wednesday that Romero had a gun but never showed it or pointed it at officers.

According to Romero's stepson, the family had a restraining order against Romero. Tuesday night, the mom and stepson were at the home, along with four other girls.

Romero showed up, drunk with a gun and started banging on the door, his stepson said.

"He sees me, he grabs the gun and he tries to point it at me and my sister gets in front of him. And said, "you gonna shoot me?" said Romero's stepson.

As he was trying to get into the home, the stepson and mother stopped him. He then busted a window and fired three shots into the home.

One of those bullets hit a 19-year-old woman.

The woman was transported to Central Carolina Hospital and then transferred to UNC Chapel Hill Hospital for treatment of a gunshot wound. She is listed in stable condition.

As part of standard procedure, North Carolina's State Bureau of Investigation has been called in to investigate.

The officers involved will be placed on administrative leave with the investigation is ongoing.
Report a correction or typo
Copyright © 2022 WTVD-TV. All Rights Reserved.
TOP STORIES
Winter storm moves out, refreeze possible overnight
NCSHP reports 200 crashes statewide, urges drivers to stay home
Monday events canceled, postponed due to winter weather
Why do we get freezing rain instead of snow or sleet?
FBI identifies hostage-taker at Texas synagogue
How to drive on snow, ice and get out of a skid
Expect more worrisome COVID variants after omicron, scientists say
Show More
After Biden's first year, the virus and disunity rage on
Novak Djokovic leaves Australia after court rejects visa challenge
Ukraine claims Russia behind cyberattack in 'hybrid war'
Hostages in N. Texas synagogue 'out alive and safe,' Gov. Abbott says
Man shot, killed by officer at Duke University Hospital
More TOP STORIES News