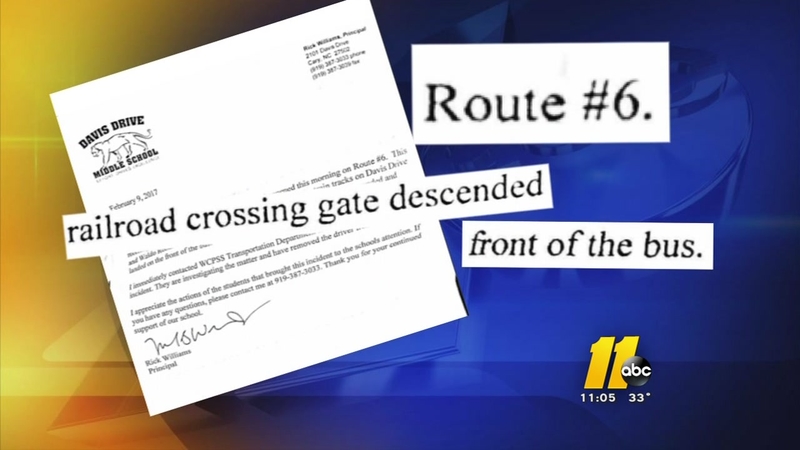 School bus has too close for comfort call with train

CARY, North Carolina (WTVD) -- When Kristen Mota's daughter got off the school bus Thursday afternoon, she handed her mom a letter and then showed her video that Mota said made her feel physically ill.

"It's disturbing, it was just really really close," said Mota.

The letter was addressed to parents of students who ride the No. 6 bus route to Davis Drive Middle School.

It was from the principal, Rick Williams, informing parents of reports of an incident with the school bus Thursday morning at train tracks near the school.

It described that when the bus was stopped at the tracks on Davis Drive, just after Waldo Rood Boulevard, the railroad crossing gate descended and "landed on the front of the bus."

"It was terrifying," said sixth-grader Ivy Mota, "I thought I was going to die."

The tracks and Davis Drive cross at a diagonal. Ivy was sitting toward the back of the bus when she pulled out her cell phone and started recording her view from the window. That short clip shows what looks like a freight train passing and you can see the crossing gate.

The incident has been circulating on Facebook and at last check there was at least one comment saying that crossing gate has malfunctioned in the past.

Still, what happened, comes as a shock.

"For my daughter to come home and tell me that the driver didn't stop to look both ways, knowing lights come on to indicate that the arm is going to come down when the train is coming, well before the arm comes down I'm a little confused as to how this could be handled so lightly," said Mota.

The letter from the principal goes on to say that the Wake County Public School System Transportation Department is handling the situation and it is under investigation. But that's all they would say for now, which Mota finds frustrating.

The school bus was stopped at the tracks on Davis Drive, just after Waldo Rood Boulevard,

"My concern is the fact that they said they removed the driver from the route, does that mean they put her on a route with other kids where the same thing can happen?", said Mota, "I mean there wasn't a whole lot of information."

When pressed for more information, a spokesperson for WCPSS echoed the letter from the principal that an investigation is underway. They would not comment further on the employment status of the bus driver.

Overall, Mota is pleased with how the school responded in notifying parents and with replacing the driver for the ride home.