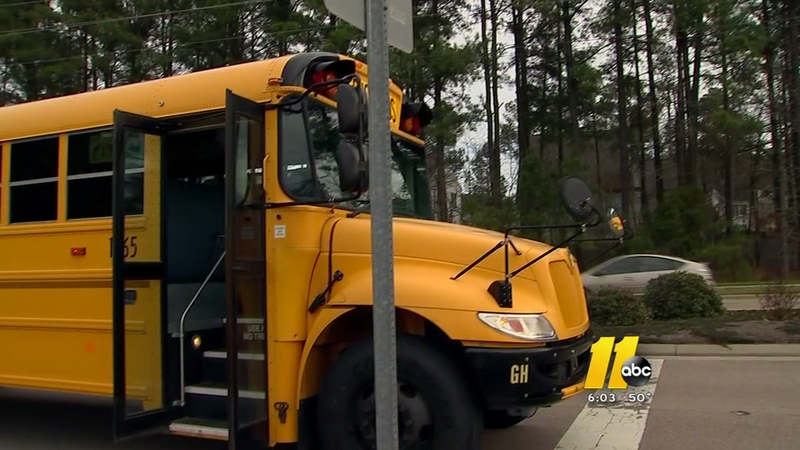 School bus driver steps down after brush with train

CARY, North Carolina (WTVD) -- A Wake County school bus driver is off the payroll after a "terrifying" brush with a train.

A Davis Drive Middle School student shared cell video with ABC11, showing a freight train running perpendicular to the bus. The bus driver keeps speed and approaches the railroad crossing as the arm comes down.

The Wake County School District says the bus driver, who is not being identified, resigned Friday morning.

"Especially near the railroads, they (bus drivers) should be very careful because there's a bunch of kids inside," said parent Viji Selva.

"They should stop here and pay attention because this can be a very big accident. The train is not going to stop, so it could be disastrous," said parent Ashutosh Upadhyay.

Upadhyay said the children were disoriented after the incident.

"People were confused exactly what happened and why it happened," he said.

No students were physically hurt, but Ivy Mota, the sixth-grader who recorded the incident on cell-phone video, described the ordeal as "terrifying."

The principal sent a letter home to parents letting them know the gate landed on the front of the bus.

WCPSS says staff is investigating, but would not answer any of ABC11's other questions about the incident.

The company that owns the track is also looking into what happened.

"CSX has received reports of possible crossing gate malfunctions at Davis Drive and Waldo Road in Cary, NC," said spokesperson Kristin Seay. "CSX teams are evaluating the equipment for any repairs that may be needed."

Even if there was a malfunction, there are protocols for bus drivers. They are supposed to stop at one line before crossing the track.