Should all NC school buses have seat belts? Very few do 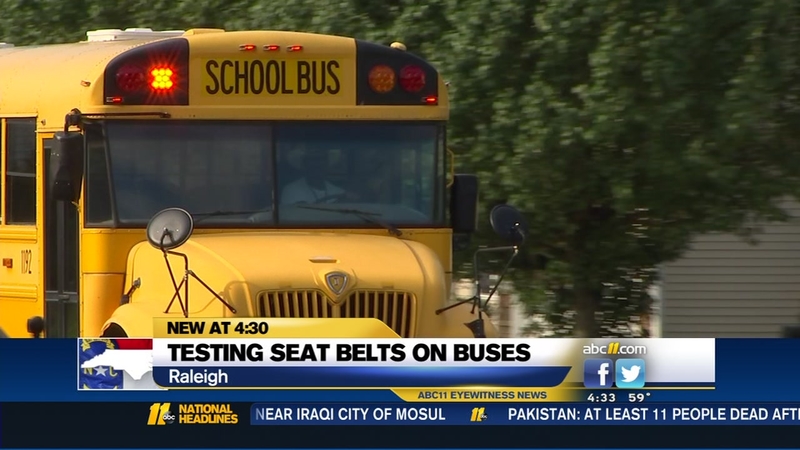 Should school buses have seat belts

RALEIGH (WTVD) -- The debate over seat belts on school buses is reigniting after a deadly crash in Tennessee killed five children.

Fewer than 1 percent of buses in North Carolina are equipped with seat belts.

The NC Department of Public Instruction initially tested the restraints on buses 13 years ago, but offered school districts the chance to get lap and shoulder belts on new buses for the first time this year.

Fewer than 1% of NC school buses have seat belts. Do you think they should be required?

So far, only 11 counties have signed up for the program -- Burke, Jackson, Henderson, Rowan, Transylvania, Carteret, Surry, Person, New Hanover, Guilford and Washington.

School districts that want them installed must have policies in place before making the request to the state.

"It's a really concentrated effort to make sure that even though the belts are on there that the kids use the belts," said NC DPI Transportation Dir. Derek Graham.

Adding seat belts to a new bus costs about $7,000. A mandate on every bus in the state would cost tens of millions of dollars.

"That would be something to come from the General Assembly if not from the federal government," Graham said.

Spencer Jenkins has been driving buses in Wake County Schools for nearly 25 years.

"I am very, very careful," he said. "Very seldom do you hear of a school bus crash in Wake County that involves a serious injury."

School buses have been touted as among the safest vehicles on the road.

Jenkins said he does not think seat belts on board are necessary.

"To have seat belts for 50 kids probably would be more of a hassle to try to get everyone out of the seat belt if there was a real big emergency," he said.

Graham said the program to add seat belts to buses was originally meant to keep students in their seats so drivers could focus on driving.

ABC11 asked Wake County Schools why the district has not requested seat belts.

"We don't anticipate getting any new school buses for another few years, so this isn't an option for us right now. In the meantime, we plan to get feedback from other school districts participating in the state's pilot program," said WCPSS spokesperson Heather Lawing.