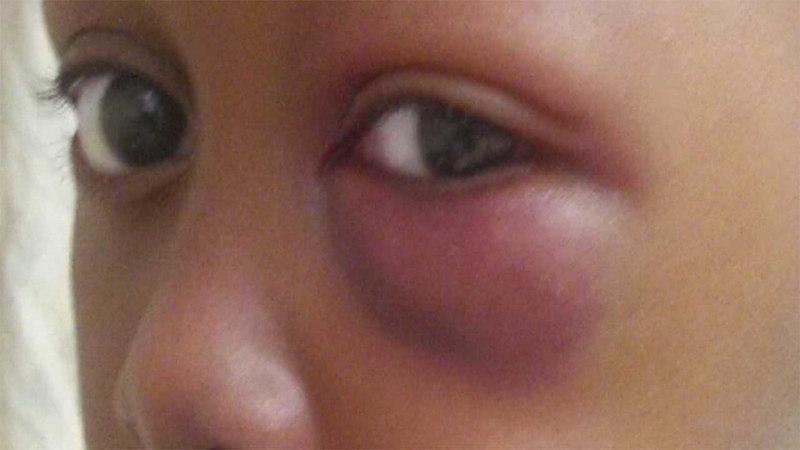 HOUSTON -- It was an accident on the playground, but a mother in Texas is furious and believes the school didn't treat the injury seriously.

Jamal Cloman, a first grader at Bonham Elementary School, was playing football during recess when he ran into a pole. He says he was in pain and was immediately sent to the nurses office.

Samantha Edward says the nurse told her that her son looked fine and nothing was wrong with him.

"She gave him an ice pack and sent him back to class," Edward said.

Jamal echoed what his mom said.

"The nurse told me to shut up and sent me back to class," he said.

Edward says her son's teacher sent him back to the nurse and finally called her. She was shocked when she got to the school.

"I was scared and I was crying, I thought my child is going to pass away," Edward said. "His eye was swollen and it was black and blue. He was out of it and slurring all of his words. He couldn't stay awake."

She decided to take Jamal to the hospital herself, instead of waiting on an ambulance. After an MRI, doctors told her that Jamal had a concussion and eye damage.

"They said the bone around his eye was broken," she said.

When asked about the incident, school leaders released a statement:

"A Bonham Elementary School nurse followed proper concussion protocol. The nurse conducted two concussion tests. After the second test, it was determined the student needed to be taken to the hospital.


Edward says her son's injury wasn't taken seriously. She says her son, Jamal, is now enrolled at a new school.

"I was like, 'why wouldn't you all call me instantly?'" Edward said.

"Call my mom the first time," he added.