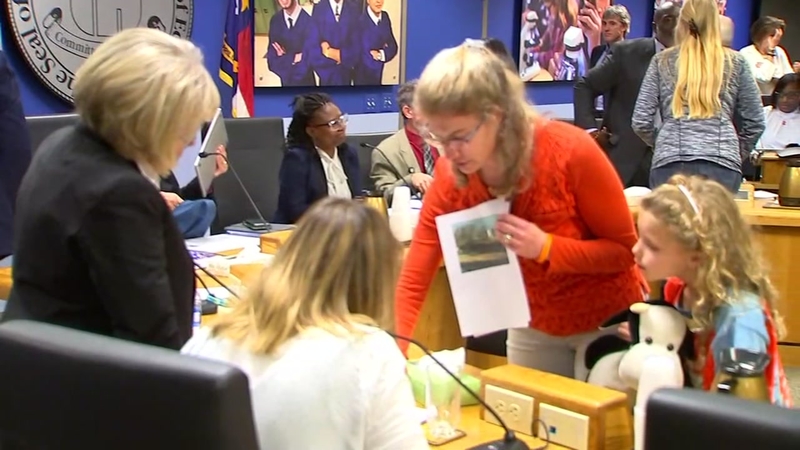 Donald Agee was the only board member to oppose the hotly contested reassignment plan that parents have been fighting for months.

"There's no clear feeling of stability here," Agee said. "We talk about our four pillars for our enrollment, but if they don't rest on a solid, monolithic foundation, they are not going to be very supportive or stable of anything."

Only four parents signed up to speak Tuesday, which stands in contrast to more than 30 that signed up in the past.

Reassignment staff reviewed the final draft with school board members in the work session before the vote in the board meeting itself.

"It's never easy to know that we have people that are walking away disheartened, disenchanted with us, but I assure every parent that this isn't easy and none of it is personal for us," said Monika Johnson-Hostler, board chairwoman. "We know that everyone cannot walk away from this conversation getting the seat at the school that they want.

"It was hard for me to say to those children, to those young kids -- the fifth- and second-grader -- that we didn't make the decision they were asking us to," she added.

“It’s not a perception anymore. We have the evidence.” Wake county moms sounding off after @WCPSS board votes to approve reassignment plan. Brenda’s two kids would be moved next year. #ABC11 #reassignment pic.twitter.com/qwWnfcRXO3

Brenda Nichols is the mother of those two children to whom Johnson-Hostler was referring. They attend Mills Park schools -- but that will change.

"It's about our kids -it's about the social and emotional development of our kids," Nichols said. "It's about the family of educators and friends that our children have been going to school with for years."

Her son Justin, the fifth-grader, will go to Alston Ridge Middle School next year. Her daughter Larissa will attend Carpenter Elementary.

Wake County is opening four new schools and is not only trying to fill them but also to ease overcrowding.

"We understand it's a give and take," said Debra McNaughton, another parent. "This is a growing area, and we're going to have to be flexible. But to give up our seats for new neighborhoods coming in so that builders can advertise those schools as traditional calendars is insulting."