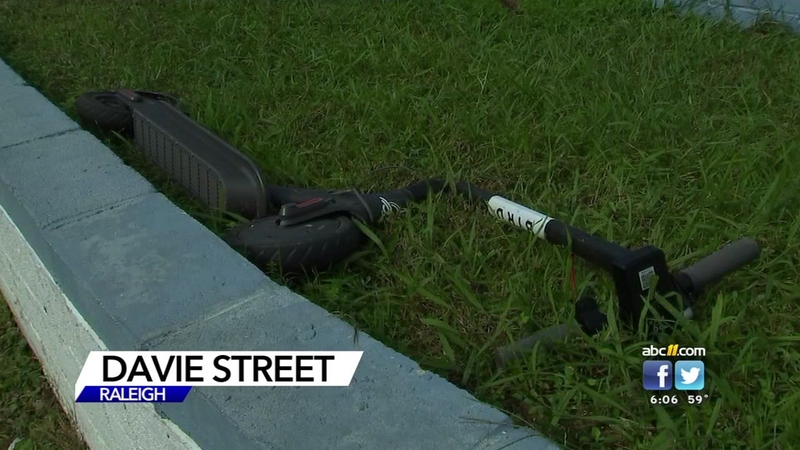 It was the 25th since more than 1,500 scooters were dumped on the city early in July.

So far in November, Raleigh is experiencing an average of one crash every two days.

The collision Thursday morning happened just east of downtown Raleigh at the intersection of Davie and Haywood streets.

A child who appeared to be well under the legal riding age of 18 was hit when he ran the stop sign on Haywood according to eyewitness Amy Kirkhum.

"They just came out of nowhere without stopping for the stop sign," Kirkhum told ABC11.

The Honda Fit that hit the child had a dent in the driver's door and a smashed windshield.

But the scooter rider had no visible injuries, according to Kirkhum.

"When I saw him bounce off the windshield, I thought he could be hurt pretty seriously. So luckily he got up but we had to convince him to wait around because I didn't want him walking home if he had a concussion."

The young woman who was driving the Honda was visibly upset.

"She was shaken pretty bad. She felt terrible. I could tell. But I don't really think it was her fault," Kirkhum said.

The crash happened just a few houses down from Evette Hunt's home on Davie Street.

"It didn't surprise me at all nope. Not at all. I knew it was bound to happen. It was just a matter of time," Hunt said.

Hunt told ABC11 that just a few hours earlier, the same thing almost happened to her while driving near Shaw University.

"I saw two young kids, looked like they were under the age of 11. I had to slam on brakes to keep from hitting both of them. They were crossing the street. Our light was green."

An ABC11 news crew took a short ride with a dash cam near our downtown Raleigh Eyewitness News Center and spotted numerous violations by scooter riders.

None of the riders seen had on helmets.

One blew through a red light while making a left turn.

Another rider was in the lane of oncoming traffic swerving back and forth.

And two women riders were on the sidewalk - another violation.

Hunt said she is among the many who have complained about people riding illegally.

"They should start writing up more tickets for these scooters," she said. "And I think that that would probably cut down on some of the abusiveness of these scooters."
Report a correction or typo
Related topics:
trafficraleightransportationcrash
Copyright © 2022 WTVD-TV. All Rights Reserved.
TOP STORIES
Snow fall begins in some parts of central North Carolina
NC prepared as winter storm brings rain, snow and sleet
Schools in Wake, Durham counties to close Friday
Contact tracers' role changes as pandemic reaches new heights
Flavor District, Triangle's largest 'ghost kitchen' to open in fall
Residents in Wilson prepare for black ice and snow
LATEST: Many testing sites closed Friday because of winter storm
Show More
Reporter hit by car on live television, but continued reporting
Check your tires before -- and after -- the wintry weather
American Airlines flight diverted over maskless passenger
'We can't get any more': Stores struggle to restock shelves
Essentials to keep in your car during winter storms
More TOP STORIES News