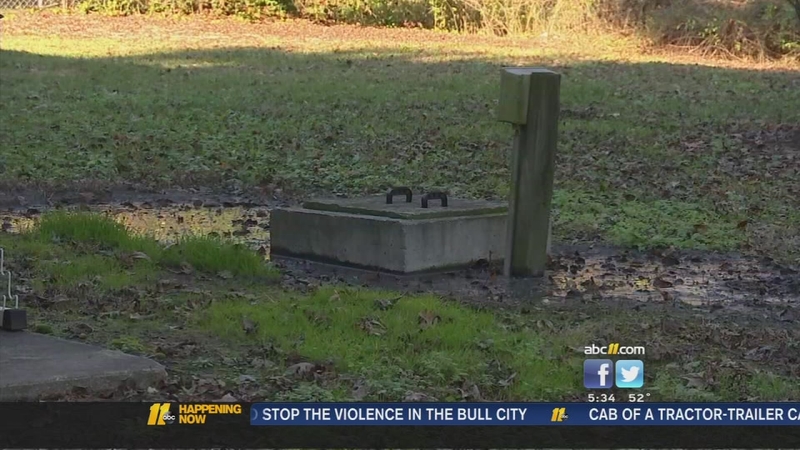 CUMBERLAND COUNTY (WTVD) -- There's no mistaking the smell behind one Dolphin Street home. Neighbors will escort you there to see the problem.

It is human waste overflowing from a dilapidated septic system, and it is a problem that has plagued dozens of homes in the Bragg Estates subdivision.

"It's just crazy," said Ryan Ballard, one of the residents faced with the issue.

Ballard and others said they are eagerly awaiting a chance to take the county up on an offer to connect with a new sewer system. That $2 million system has been approved by Cumberland County as they look to help residents overcome an issue that dates several decades to when the subdivision was built.

"It couldn't happen any sooner," Ballard said. "The quicker it happens the better."

When Bragg Estates was developed in the mid-60s, residents and county official say the septic-tank regulations weren't as strict as current standards. Multiply that by the years of wear and tear and overuse by multiple residents on small tank systems, and you have a recipe for disaster. Fuller said the health department condemned the home next to him, once a household of more than 10 people was unable to maintain their tank and the overflow.

For those who are frequently calling someone to pump the tanks, there's an approximate $200 fee per service visit.

"Every three months you've got to do that so you can survive, or the health department will shut you down," Fuller said.

"We got the septic tank pumped probably six months ago, and now the entire tank had to be re-pumped literally last week," said Ballard, who also noted the system's inability to handle heavy rainfall.

County officials tell ABC 11 the sewer system project is in its infancy stages, with construction set to begin in 2017. That construction would take nine months. Fees built into residents' monthly bills will help pay-off the system loan. Combined with service and hookup fees, residents will see monthly bills in the $75 range. Public meetings would be held ahead of time to educate those in need about their hook-up options.

"It's not the county's job to solve your septic tank problems, so I appreciate this," Fuller said. "I will welcome a sewer system in this area."