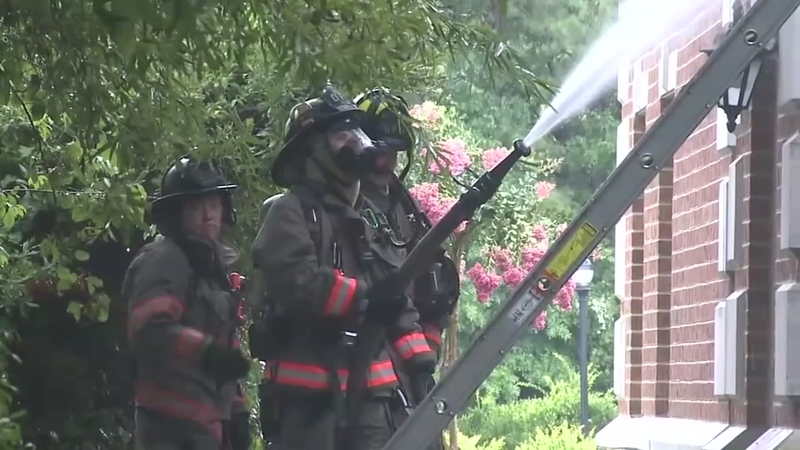 On Thursday afternoon, power lines were reported down in Durham, leaving more than 4,000 people without power.

A large tree fell on a house on Dacian Avenue.

The cause of the fall is undetermined, but it was around the time the storms rolled through.
Also in Durham, a lightning strike caused a townhouse to catch fire.

Just after 2 p.m., the Durham Fire Department was dispatched to the structure fire in the 100 block of Presidents Drive.

Happening now: @durhamcityfire on-scene after a townhouse was reportedly struck by lightning. No injuries. Live reports at 4 and 5 on @ABC11_WTVD pic.twitter.com/ntMpS0gw3g

Authorities said a resident reported that lightning struck the building.

"I saw a lightning strike come down. It was quite bright and really, really loud. I thought it had hit in the little field behind," said Shirley Whitney, who lives in the building. "I walked into my bedroom, and when I came out I looked out my kitchen window and looked straight up into their upstairs window, and the window was blown out. Black smoke was rolling, and the curtain was blowing out the window and I thought I better get out of here."

Once they arrived, firefighters found a two-story unit with smoke showing from the roof.

"I was on the phone with my sister, and then I heard another pop. So I started freaking out. I was like 'oh my God what's going on.' I said 'Lordy Jesus.' And then I see the smoke start bellowing, it was like dark smoke everywhere," explained Skip Gibbs, who lives in the building.

Gibbs and his little brother escaped after being startled by the loud noises.

"'Get up bro, it's a fire,'" Gibbs told his brother. "So he jumped up, and he started running. And all of a sudden, all of this smoke started bellowing down and then I heard another pop."