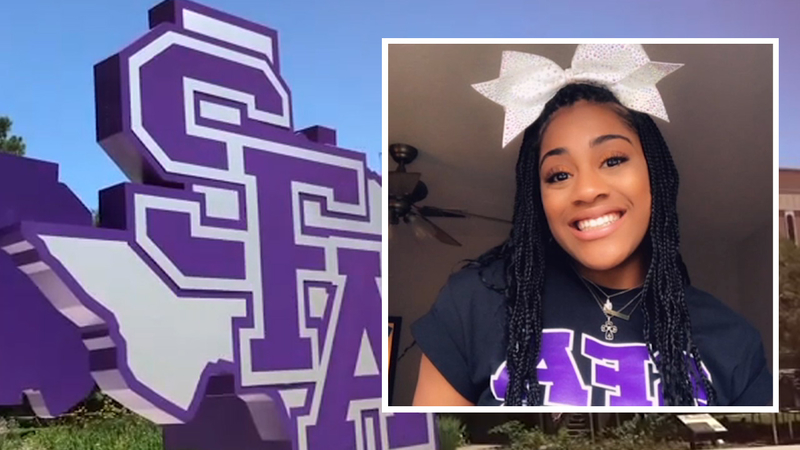 NACOGDOCHES, Texas -- Nacogdoches District Attorney's Office is now investigating the incident where a freshman cheerleader's dorm was swarmed by police with guns drawn over a false report.

During a news conference Saturday, officials said the bodycam video from the Stephen F. Austin State University police is different than what is being said by the lawyer.

SFA is now calling upon the victim's family to permit the release of the police bodycam video so that "everyone will be able to see exactly what happened, and see that the video will show a very different scenario than what is being portrayed in media," SFA's public communications liaison Erica Harris said.

SFA released the following statement regarding the body cam video:

"SFA has submitted its investigation of a false police report in a residence hall to the Nacogdoches District Attorney's office, as announced in a press conference today. If permission is granted by the victim, the university will release the body cam video from the incident."

FULL NEWS CONFERENCE: Watch the video above to see what officials said about releasing the video involving the swatting case.

The victim's family lawyer released the following statement after the press conference:

"The Evans family and their attorney were not given notice of the SFA press conference. All 11 students which SFA stated were involved in false report of felony by Chistin and endangering her life are still on campus. Normal procedure at other schools is to remove students while the disciplinary process proceeds. SFA is threatening to release an edited part of the video of their minor daughter in sleepwear to the nation. The Evans family is legally entitled to a copy. SFA'S threat to release the video to the public is intimidation to silence the victim by embarrassment. The public will not accept this. Christin Evans cannot stand to relive this trauma caused by SFA and 11 SFA students. We request SFA to start cooperating."

The call for the release of the video comes days after the police chief at SFA said the incident was not motivated by race.

The parents of 17-year-old Christin Evans said their daughter was sleeping in her room when SFA police officers suddenly barged in at 3 a.m. on Monday, Sept. 14. They believe a group of students targeted their daughter and have called on SFA to reprimand them.

The family's attorney said police told Christin they had received a report stating she had scissors and was threatening to stab students.

Police then said the report was false.

Christin's parents said police told them as many as 10 students were involved in executing the false report.

"I CAN'T SLEEP AT NIGHT:" The teen spoke out since the scary incident and said it was a terrifying moment she will never forget. Hear from her family in the video above.

On Wednesday, Chief John Fields said officials have identified a core group, three Black females and three white females, in the investigation and that all the students seemed to be associated with each other up until the incident.

In a response issued via video message prior to the latest briefing, Fields said, "a racially diverse group of students were involved in an incident involving a false report. The students will be held accountable for this at every possible level."

Fields reiterated that message again Wednesday, adding, "I can assure you, it's not racial. It's far from that."

WATCH: The chief of police at Stephen F. Austin State University responds to the case.

Fields said Wednesday that despite reports a student involved called police, it was actually a community assistant in the residence hall who called them.

According to Fields, the caller said she heard from students that Christin had been making threats to other residents about how she was going to shank them with scissors, leading to another resident having a manic episode.

Fields explained officers responded to the threat level of the possibility of a student being stabbed and killed.

When officers arrived, they were directed to Room 116. However, the call was for Room 103, where the student had the manic attack.

Officers knocked on Christin's door four times, Fields said. They weren't able to get in so her suitemate let them in through her door.

"Only one officer had a weapon unholstered," Fields told the media Wednesday. "At no time was he intentionally trying to point at the subject."

Three officers total responded, and one of them had his Taser ready. A third officer did not unholster his Taser or weapon, Fields said.

"Once they found Ms. Evans in bed, the threat was de-escalated," the police chief continued. "At no time was there any point that the officers were unprofessional."

Christin was asked to come outside of her room and she spoke with police, which Fields said is supported by body camera footage. He also said police have asked Christin's parents for permission to release the video.

The president of SFA, Dr. Scott Gordon, released a statement on Twitter saying, "Each perpetrator will be dealt with appropriately."

Gordon expressed frustration Wednesday, saying that he heard about the case secondhand and released the following statement:

During the past two days, I have received briefings on the details of the case involving the false reporting incident that occurred on September 14. As a result of these briefings, I have become very concerned about some irregularities in this case, specifically the amount of time it took for this case to be turned over to the Office of Student Rights and Responsibilities and the fact that I learned of this case from the victim's mother many days after the incident.

The delay in reporting this case to the Office of Student Rights and Responsibilities was unacceptable and will be addressed. I will engage an outside, independent investigator to conduct a review of the Division of University Affairs. This will include the policies, procedures, practices and reporting structure within housing, student affairs and student conduct. Upon completion of this report, I will evaluate all findings and recommendations and make decisions on how we move forward to ensure our future procedures are seamless and timely.

While police plan to submit the case to the local district attorney's office, Fields explained there are two parts to the university judicial process that work simultaneously: criminal and student rights.

Student rights will hear the case and determine the punishment, if any, that would impact a student's standing at the university.

Meanwhile, Christin has since moved into a new dorm room and continues to take classes online.

FULL PRESS CONFERENCE: Police walked reporters through the "swatting" incident at Stephen F. Austin that reported involved up to 10 students.