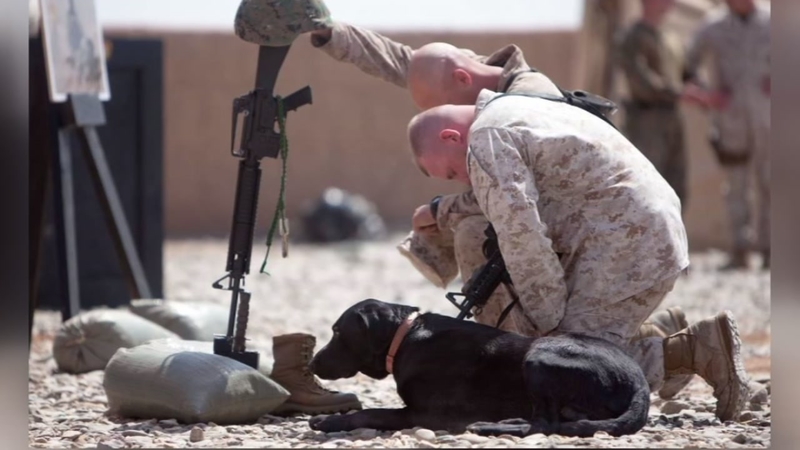 He happens to be the family dog of the Zuendel household but he's also a Marine Corps veteran who saved American lives detecting IEDs in war zones.

And now he has been honored with the title of Military Dog of the Year.

He is also among the finalists in the 2019 American Humane Hero Dog Awards.

"I just think it's remarkable for him to be able to go through something so traumatic and yet still be kind and tender," said Caroline Zuendel, his owner of seven years. "I think we could learn a lot from that."

"He deployed three times with the Marines-once to Iraq and twice to Afghanistan and on his last deployment to Afghanistan in 2012 he and his handler Lance Corporal Abraham Tarwoe experienced a blast," she said.

Cpl. Tarwoe died in that blast. Yeager, who lost part of his ear and sustained other shrapnel wounds, received the purple heart for his service.

Initially, Yeager was offered to the wife of Cpl. Tarwoe but she could not take him, so the Zuendels got him.

Zuendel still has the collar Yeager was wearing when the IED hit.

He's on to the final round of the American Humane Hero Dog Awards. Project Hero K-9 Foundation, which helps dogs like Yeager get care after they're finished serving, sponsored him last summer.

"I know that he's been exposed to the most depraved, human acts and yet he's so lovable and nobody goes by him without getting a kiss or some form of affection," said Caroline.

Caroline said she's been there at the best and worst of times for her family, especially her three kids since they got him in 2012.

"I think it's just meaningful on so many levels," she said. "It's not only about Tarwoe--I know what it's like to bury people and to have something when you're not in your element."

The public is invited to submit one vote per day through Sept. 9 at HeroDogAwards.org.

The winner will be named the 2019 American Hero Dog at the star-studded 2019 American Humane Hero Dog Awards Gala on Saturday, October 5 at The Beverly Hilton, and will later broadcast as a two-hour special on Hallmark Channel on Wednesday, October 23.