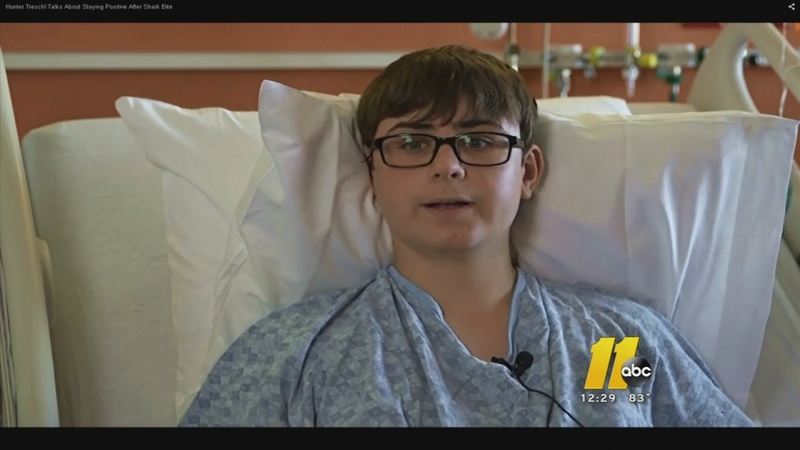 CHAPEL HILL, N.C. (WTVD) -- The 16-year-old victim of this weekend's shark attack released a series of videos on Tuesday about his traumatic experience from his hospital bed.

On the same day, the family of a 12-year-old girl who was also attacked released a statement about her condition.

That girl has been identified as Kiersten Yow. After her initial treatment, she was transported to N.C. Children's Hospital at UNC. Yow lost a portion of her left arm and suffered injuries to her left leg.

The male victim was identified as 16-year-old Hunter Treschl. He lost his arm in Sunday's shark attack on Oak Island.

Treschl released a series of videos from the New Hanover Medical Center where he is being treated.

Our daughter, Kiersten Yow, was the female victim of Sunday's shark attacks on Oak Island. As the media is reporting, she lost a portion of her left arm (below the elbow) and suffered injuries to her left leg.

Kiersten was taken to New Hanover Regional Medical Center in Wilmington immediately after the incident and was transferred to N.C. Children's Hospital at UNC yesterday, where she remains in stable condition and is receiving excellent care. She has a long road to recovery that will include surgeries and rehabilitation, but her doctors at UNC expect she will keep her leg, and for that we are grateful.

We want to thank the good Samaritans and emergency responders whose clear heads and quick actions saved Kiersten's life. We also thank her extraordinary doctors and nurses in Wilmington and Chapel Hill.

This has been an extraordinarily traumatic event for our entire family. We need time and space to come to terms with what has happened and to help Kiersten recover.

We appreciate the public's well wishes and prayers, but we ask that the media please respect our privacy as we navigate this difficult situation-privately, as a family.