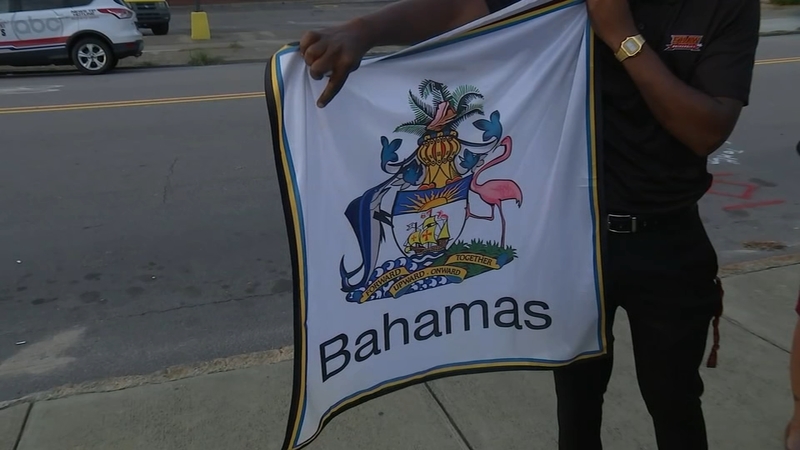 RALEIGH, N.C. (WTVD) -- They are coping like a family. And it's a tight-knit Bahamian family here at Shaw University.

That's because of all the international students at the Raleigh school, the country with the largest on-campus representation is the Bahamas.

And some of these students still don't know whether certain family members are OK.
Ian Finley, a junior, and Laquell Harris, a senior, both born and raised in Nassau, are two of the many Bahamian undergrads here at Shaw leaning on each other while their native country reels from Hurricane Dorian's apocalyptic devastation.

"People's homes totally destroyed. My grandmother's house was totally flooded," Finley said. "She had to evacuate during the storm. And just hearing that type of information while I'm here -- I feel helpless."

“I feel helpless.”
• • •
As The Bahamas reel from #HurricaneDorian, the especially large contingent of Bahamian students at Raleigh’s @ShawUniversity is leaning on each other for support to grasp the devastation back at home. #abc11 pic.twitter.com/szcgE4Ktq0

Things are even more concerning for Harris. Her father lives on Abaco Island where nearly half the homes were destroyed. She hasn't been able to reach him since Dorian made landfall last weekend.

"They have like these lists circulating to say who's safe and who's not safe. So, I wake up every day at seven checking those lists," Harris said. "I call him every day to trying to see if he'll pick up the phone."

Shaw senior Laquelle Harris hasn’t been able to reach her father on Abaco Island since #HurricaneDorian made landfall in The Bahamas. #abc11 pic.twitter.com/GiEZcf9Sxn

Finley and other fellow Bahamians are doing their best to reassure her.
"I just tried to show (Laquell) that maybe her father is just helping other people so much where he's not trying to communicate. But at the same time, it's almost impossible to communicate," Finley said referring to the Bahamian telecommunications networks ravaged by the Category 5 storm which parked itself over the island for a day-and-a-half.

In the meantime, their Shaw family is scrambling to help.

University leaders and the student government are working to organize hurricane relief fundraisers on campus.

"We're definitely putting together donations as far as money and toiletries, cleaning supplies; anything that we can send to The Bahamas to help them rebuild," said Jechel Briggs, the Student Government Association President.