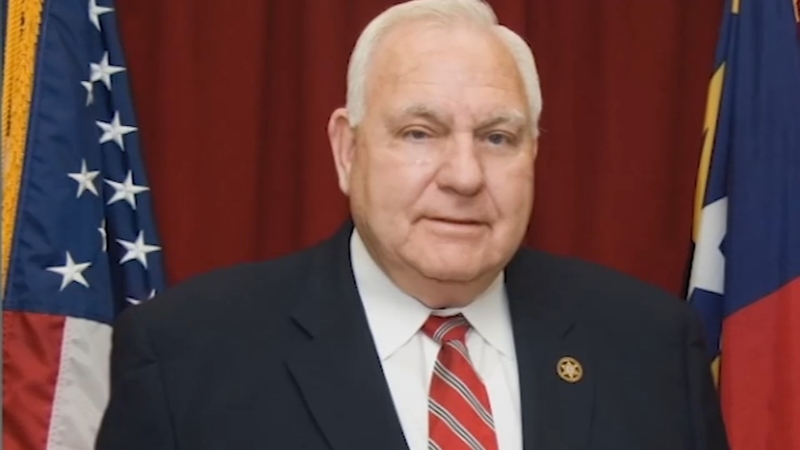 FAYETTEVILLE, N.C. (WTVD) -- Flags fly at half-staff in his memory across the Sheriff's Office he once led, where inside black cloths drape doorways. For more than 22 years, Earl "Moose" Butler served as Sheriff of Cumberland County, the culmination of a life of service and deep ties to the community.

"Sheriff Butler was personal. He was a man that enjoyed people, enjoyed taking care of people. That was just him," said Cumberland County Sheriff Ennis Wright, who was appointed Sheriff in 2017 after Butler's retirement.

During his time in office, Butler oversaw the national and international accreditation of the Sheriff's Office, the building of a new detention center, a training center which now bears his name, and the creation of a memorial honoring fallen law enforcement officers. Among pictures overlooking Wright's desk are many alongside Butler.

"I look at how he came into office and took this Sheriff's Office and just turned it around," said Wright recalling Butler's confidence and ability to communicate effectively.

Butler also served on the Governor's Crime Commission and as president of the North Carolina Sheriff's Association from 2001-2002.

"Everyone knew that he was going to do his best. That he was doing his best for Cumberland County. But they also loved him. They loved him because he gave a lot of respect to the people that voted for him. We can always count on Moose Butler," added Cumberland County Commissioner At-Large Charles Evans.

Evans, who often attended church with Butler, noted his ability to connect with people from different backgrounds.

"That helped people to gravitate towards him because of his sincerity and compassion," said Evans.

Butler attended Massey Hill Baptist Church in Fayetteville, where he was an athletic star, eventually playing football at UNC-Chapel Hill before a brief career in the NFL with the Pittsburgh Steelers. After his playing days ended, Butler returned to Cumberland County, where he worked for the school district and state Department of Corrections before being elected Sheriff. Butler would also accompany and help his father, a traveling preacher, set up.

"He had a great beginning and humble beginnings, and hard work was a great part of that," said Pastor Tim Evans of Massey Hill Baptist Church in Fayetteville, where Butler attended for sixty years.

The road outside the church is named "Moose Butler Lane" in his honor.

"If that door was open, he was here. But seeing the sign is a reminder of stability and a person who made a difference, who loved his family," said Evans.